We regretfully leave our sweet cabana on Roatan for a day of overland travel on ferry, chicken bus and taxi to find a sweet hostel with a peaceful and friendly courtyard in Granada, Nicaragua…

Leaving our sweet little cabana on the pristine sugar sand beach of West Bay, Roatan was difficult. We had spent three weeks there.  Granted, Leo had been quite sick with tonsillitis, but where better for him to be sick? We had the perfect little set-up for him to let his little body work the wonders of healing.  Now it would be on the road again and hoping to find another sweet situation in Granada, Nicaragua.  Here is a picture of a friend we made and us snacking on tiny bananas just in front of our cabana.

We were again on the ferry from Coxen Hole (yes, HOLE!) over to La Ceiba and then over land for several legs to Granada.  When we finally pulled up to our hostel, we were exhausted, dusty, tired, hungry and we had to pee.  Don’t get me wrong, we did love travel.  What I am attempting to purvey here is the difficulty of overland and backpacker travel.  It is not all roses.  No, we didn’t have to go to work everyday but, there were hardships and mishaps which made up the journey.  I digress.  We walked into our hostel and smiles quickly found their way onto our faces.  Our hostel was ideal.  There was a large inner courtyard with hammocks.  There was a smallish pool in the courtyard, a telephone with free international calling, free internet and a little café with decent food and coffee.  Above all, there was a very nice atmosphere to this place and many people were already approaching us in order to meet our little four-year old son and magnet of joy: Leo.  Many touches of the blond hair and cheeks.  Leo’s eyes were wide open, taking in all the new faces. He was such a social guy.

We were given a private room with a private bath and we quickly changed out of our dirty clothes.  There was a hand-washing laundry area on the roof and that was one of my first tasks.  While Dean and Leo unpacked and got cleaned up, up I went and enjoyed the effort of getting our travelling clothes washed.  The scene from the roof was of variously shaped roof-lines of all manner of dwelling.  There were calls of roosters and hens and backfiring car engines.  There were smells of burning garbage, which is never pleasant, but which is prevalent.  A note here on our attitudes regarding Leo and his welfare.  One of us was ALWAYS with Leo.  Not once was he, even in a friendly hostel, left with a stranger.  We just had no idea what could happen to him while our backs were turned.  Kidnapped?  Sold? It was a constant worry for me.  I clearly remember the low-level stress of that reality.  Our precious son needed to be watched by us because there are crazies everywhere.  And sometimes it is impossible to detect.  Although, I’m pretty good at detecting it.  Takes one to know one.

We met some interesting folks at this hostel.  Karin from Germany. Peter from Holland and a big guy named Erild from Norway.  We ended up hanging out with them for several days while in Grenada.  We had met Erild of Norway in the Tegucigalpa, (the capital of Honduras) bus station where we started the second day of our journey enroute to Granada from The Bay Islands of Roatan. We shared a taxi ride from the bus station in Managua and after a couple of tries were lucky to find the great hostel here in Granada.

From an email message home:

The next day Erild, with his camera, came with us to find a playground for our little ball of pent up energy (I wonder of whom I am referring?) As luck would have it, we found a park with play equipment on the wonderfully breezy banks of the huge, fresh water sea: Lago de Nicaragua and the next day we went to a 600-meter-deep volcanic lake and spent the day at the only hotel there, swimming, basking and eating wonderful fare at the lake side restaurant retreat. 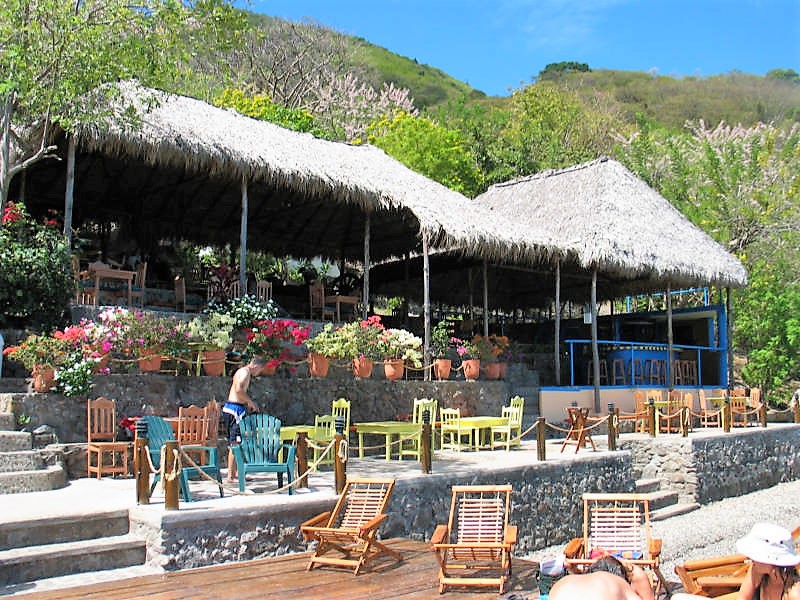 The taxi ride there was hilarious.  Picture a 250-pound Norwegian squeezed into the tight front seat of a compact rust bucket.  He wasn’t as comfy at the other 4.5 of us in the back seat though: Karin of Germany, Peter of Holland, Dean, Leo and I were tighter than a can of worms.  We bottomed out a couple of times and all cursed in various languages (except Leo, he squealed) in unison.  The taxi driver being Nicaraguan and Leo being a dual citizen of Canada and the U.S. meant we had six different nationalities squashed into one little car.

We spent the day at a hectic, large, dusty market in a town called Masaya and upon our return literally ran for the pool and sizzled as we hit the cool water.  I’m still wet as I try my best to put a few lines together about out latest adventures.

Tomorrow we are going on a canopy tour of Mombacho Volcano which is a 45 minute chicken bus trip at a cost of 50 cents each.  The owner here, who has a four-year-old girl, says that Leo will love it.  We’re hoping to see some live forest creatures.  Maybe even a sloth!

When we got on the bus this morning there was this gorgeous bright young boy of about ten or so selling squares of nutty snacks, two for one dollar.  They were quite delicious.  I winked at him and he didn’t really know how to react but, finally, he smiled.  We gave him a pair of pants that Leo has out grown.

We are leaving this hostel today and will likely not have as easy access to internet in the Pacific Coastal town of San Juan del Sur, Nica.

I couldn’t wait to tell all of you about our adventure yesterday.  It was the coolest thing.  We were in the canopy of the Mombachu Jungle for several hours, walking, sliding, swinging and climbing through the treetops and then abseiling down to the ground again at the very end of it.  Truly awesome.  Leo was gob smacked (as the UKers say), as were we. The guides geared us up with climbing gear and helmets and gave us the very serious safety talk. Leo asked a few questions! “Is this the carabineer that my gloves go on?” We could tell that he was concentrating on understanding all that was said.  It was too cute.  He could sense the seriousness of it.

He started off a wee bit tentative climbing up the initial ancient, massive tree — the ladder was 100 feet long and just made it to the lowest branches. (We were glad when they told us that the trees were not harmed — they strap the trees with canvas and rubber, instead of nailing them, like some of the other companies). We called to Leo, telling him he was just like Spiderman.  Then we started singing the theme song: “Spiderman, Spiderman, does whatever a spider can…”  That seemed to get him into the spirit of the thing.  From there we stood on a platform, safety tied with the expensive climbing gear, while the three guides prepared us for the first rope slide to the far-off tree.  Leo did that one with a guide but had so much fun and was so unafraid that the guides allowed him to do the next several slides unaccompanied and he even did the Tarzan swing and the 150-foot abseil at the end!  We all had a ball.  The guides decided to DROP me down the tree “Rapido” because of all my crazy antics during the tour.  I thought I was going to die, for a split second there as my heart leaped into my mouth.  But it was fantastic.

On the walk out of the jungle, Barcell, the Senior guide, climbed into a cocoa tree and got us a cocoa fruit.  A football shaped, bright yellow fruit that he then let us sample.  Very interesting.  While the guide was cutting it open we were telling Leo that a Snickers Bar was inside.  ha ha

The road into and out of the park was 30 minutes and was so bumpy we all had a great workout bracing ourselves.  Leo was so wiped out after the tour that he actually fell asleep in my bouncing lap.  It was so bumpy we couldn’t even talk but that wee guy was just pooped!   We were very proud of our little guy.  He is a true adventurer. This is his mother writing though, what else would I say?

Later that day, after a good, hearty lunch, I took Leo for a haircut. The haircut cost Cord 20. about $1.50 (that’s one dollar and fifty cents!!!!) but it was not just a haircut, it was a 45-minute CEREMONY.  The barber, a young, perfectly groomed Nicaraguan man of about 30, was INTO IT.  Seriously INTO IT.  He flicked out that towel. He waved his arms around.  He brushed the blond hair off his face once, twice, three times during the course of the ritualistic haircut.  I was quickly understanding, as I sat and watched the other several clients being beautified: 4 men and 2 small boys, that these people take the male haircut very, very seriously.  The very small boys did not so much as move a muscle for the whole thing.  Conclusion: they have had haircuts of this nature from infancy.  After a brief head massage and then combing, the barber removed the drape, flicked it out and called me over to inspect.  I could see from my seat that it was absolutely perfect and went to hand him the money but no, there was a further step: he unwrapped a shiny new straight razor blade and made a point of me seeing that.  He bent it and examined it, showed it to Leo and then put it into the straight razor.  (at this point I was frantically telling Leo, it’s very, very sharp. You must stay perfectly still.  Freeze, okay?  His big eyes told me that he would obey. With a dab of water all along Leo’s hairline and a flourishing wave of the blade, the finishing touches were made. Then the palm-aid and combing again. This time each hair was placed with the comb.  I had taken three photos by this point.

Tuesday we will leave for San Juan del Sur on the Pacific Coast and hopefully get Leo going on the boogie board again.  We will stay there for a few days and then cross the border into Costa Rica and meet friends of ours on the Nicoya Peninsula.

Life is great.  Hope this finds you all happy and wintering well.  We miss you and hope to receive messages from you!  We love news from home!    Next up….San Juan del Sur, Nicaragua