When the cat’s away, the mice shall play

Continued from Let The Games Begin Part 1 and Part 2

Mom and Dad would sometimes go to Florida at Christmas or March Break and would leave us at home with one of the eldest sibs in charge.  One year, my oldest brother Matt was left in charge. He and his new teen-age wife, June took care of we younger ones.  Let’s just say that there were a few parties down the basement and sometimes we had really bad tasting spaghetti sauce, a la June.  One time, June tried to pass off tomato soup as spaghetti sauce.  It was so bad that not even Sammy, our faithful leftover and liver-eating dog, would eat it.  Years later we broke it to her that it was awful.  By then she had become a good cook though, or as her son would say:  Mom’s a good cooker now, eh Dad?

The later years that Mom and Dad went to Florida saw us being taken care of by my second oldest brother, Mark.  It got a little scarier then because Mark had some sketchy friends like Byron Hedgeman and Minty.  Minty seemed fine, if a little dopey, but, Hedgeman just plain scared me.  I think he was continuously high or, in the pursuit of being high.

One time, when I was about eight years old or so, Hedgeman and I were playing a friendly game of checkers in the living room.  Hedgeman was getting very upset because I kept using my kings to jump all his checkers.

He began to ask me about my knowledge of Woodstock.  He had me there.  I had not one idea of what he spoke, and innocently told him that. 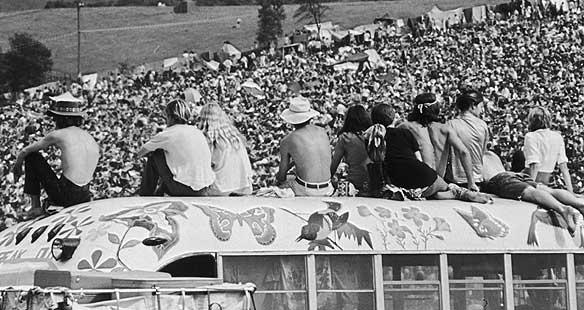 Hedgeman was irate. How could I not know about Woodstock?

He then proceeded to educate me about it. I was eight. He told me of mass crowds of hippies who traveled for miles and miles to this place called Woodstock for the concert and drugged-out weekend-long bash of history.  He told me of people being so stoned on acid, L.S.D. and mushrooms that they had no idea what they were doing.  He told me of scores of hippies wondering around in the nude with caked-on mud as their only clothes – the farmer’s field had turned to pure mud.

Then he and Mark started to recount all the stories they had ever heard about it.  Mark talked about the bad acid and how there was an announcement made that the brown acid was bad and no one should do it, Man.  I was more than just a little scared after being party to this conversation which Mark and Hedgeman were reveling in the telling of.  I was eight.  I may have mentioned that.

One time Hedgeman actually passed-out underneath Amy’s bed, down the basement.  Mom and Dad were in Cancun but returned a day earlier than planned in order to surprise us.  Matt and June, then married and June pregnant, were asleep in my parents’ bed.  Dad walked in and looked through the house for all of us.  He told Mom that he could smell burning rope coming from downstairs.

He walked into Amy’s basement room.  She was fast asleep.  However, he quickly noticed that there was a pair of Kodiak work boots sticking out from under her bed.  He pulled on them and out slid Hedgeman.  It wasn’t a pretty scene. Hedgeman somehow took off out of the house and down Pearl hill.  Dad called the police and told them,

“There’s a hoodlum running down Pearl Street and he’s so stoned he’s stunned!”

One time, Mark and Jobe had a very rowdy party and when they started doing hot knives (smoking hash off of hot knives heated on the stove elements) I called Olive Quinn, one of my Mom’s best friends, and begged her to come and get Luke and I.  It was after midnight but Van Halen’s Running with the Devil was still pounding, at top volume, throughout the house.  The bass on the stereo was turned up to the maximum.

Olive came to fetch us and take us to her house where we stayed in the basement because her husband was a very scary individual and a known bully, even though he was this prominent Catholic and a professional.  The next day, Olive delivered us back to Pearl Street.  I marveled that our six-foot fence that usually surrounded our back yard was now lying down of the grass.

At those times I wished very badly that Mom and Dad had not gone to Florida for Christmas or Spring Break.  At those times I also learned to truly appreciate our normally safe, religious and ordered home.  I don’t think my parents ever had a clue about the types of activities that went down while they were away. Chock it up to the 70s.

Decades later, while telling these stories to my best friend and husband, Dean, he looked me in the eye, took my hand and told me that I had been neglected as a child.

I’ll never forget the dawning realization that yes, that was exactly why some tales of my childhood made me feel so uneasy. Dean and I would NEVER have left our son in situations like that.  Anything could have happened with those weird wired young men who were Mark’s pals back then and who roamed freely through our home while Mom and Dad were away.  Luke and I were lucky to escape with just the psychological scars of being neglected as young children.

To be clear, there were a lot of psychological scars in my family.  It may be one of the main reasons we are all so close as siblings.  We counted on each other to get through tough times.  We cried, we sang and we laughed.  We laughed a lot.

Anyway, Luke and I were sworn to secrecy by Mark and Job lest we die by some tortuous death if we told on them.  Years later we would learn, disturbingly, that Hedgeman had died at Walden’s Royal Victoria Hospital, of AIDS.

(Photos and courtesy of Eva Player and google images)