‘I’m so glad we had this time together, just to have a laugh or sing a song. Seems we just get started and before you know it, comes the time we have to say, So Long’
~Carol Burnett

Just to have a laugh or sing a song…. the poignant words of the ditty by the eighty-something Carol Burnett whom Paul adored. He said they both had a slight palsy in the side of their faces making their smiles a little crooked. He connected with her and so, once a week, we would sprawl on the Aikins’ wall-to-wall cream-coloured broadloom in front of their floor-model, mahogany encased TV in their living-room (the Aikins had cable!) enraptured by Carol Burnett And Friends. Jinx, their moody Siamese cat would sleep on top of the TV for its warmth, tail flicking even in her sleep.

Well folks, something horrible has happened.  We have lost this amazing person.  He is gone.  Never to return except to live on in our memories.

Paul was five years old when we met, and I, four.  We moved into the red brick bungalow next door.  They lived in the brick mansion next to us.  There were eleven kids in the Aikins family.  We were seven kids.  The sheer numbers of kids (and the lack of hand held devices and video games, ie: none) made for hilarious adventures and play times between the two homes.

We each had at least one member of the Aikins family to play with who was our age.  We walked to school together.  We played outdoors and in for hours together.  It’s hard to believe that none of us ended up married to each other.  I always believed Paul and I would be wed. Not to be.

Paul was one of those friends who was just simply THERE for me. I cannot recall a single argument with him. We discussed all manner of topics.  I confided in him regarding my tough relationship with my dad. Consequently Paul would never address dad as Mister the way dad would have liked him to. This would irk dad every time. We would snicker about it later.

We competed in Miss Cuthbert’s typing class together at St Joe’s, typing as fast as we could in rhythm to Martha and the Muffins’ Echo Beach.  Paul won.  We did gymnastics

and music recitals together. Projects and fund-raisers.  We decorated for dances and chaired meetings.  I’ll never forget the amazingly fun times we managed to have with very little money but very large imaginations and unstop-ability.  We would lip-synch to our fave tunes, throwing ourselves whole-heartedly into it and making each other double in two with laughter.  Little did we know then that Paul would become this incredibly beloved teacher at Etobicoke School for the Arts.

For several years of our friendship, Paul would come by greyhound bus up to the camp on Lake Cecebe to hang with me there for a week or two.  We would canoe, trampoline, clean cottages, paint docks and picnic tables together.  It didn’t really matter what we were doing, we would just make it fun.  My little brother emailed lately to remind me of this time that Paul and I were playing piano together in the office and he was imitating someone.  Ricky rolled on the floor over that one, he recalls. Ricky also reminded me that Paul could imitate dad perfectly, especially the corny face Dad would put on when he was ushering mass at St Mary’s.

I remember the first time I felt that I had lost Paul.  It was when they moved from next door to a few streets away on Eugenia Street.  The second time I lost Paul was when I moved away for a year when my parents were in the midst of a horrible divorce.  I missed him so badly that year.  My buddy was too far away for my liking.  It was a tough year because of this.  He came to London by bus to visit once and we had a blast. 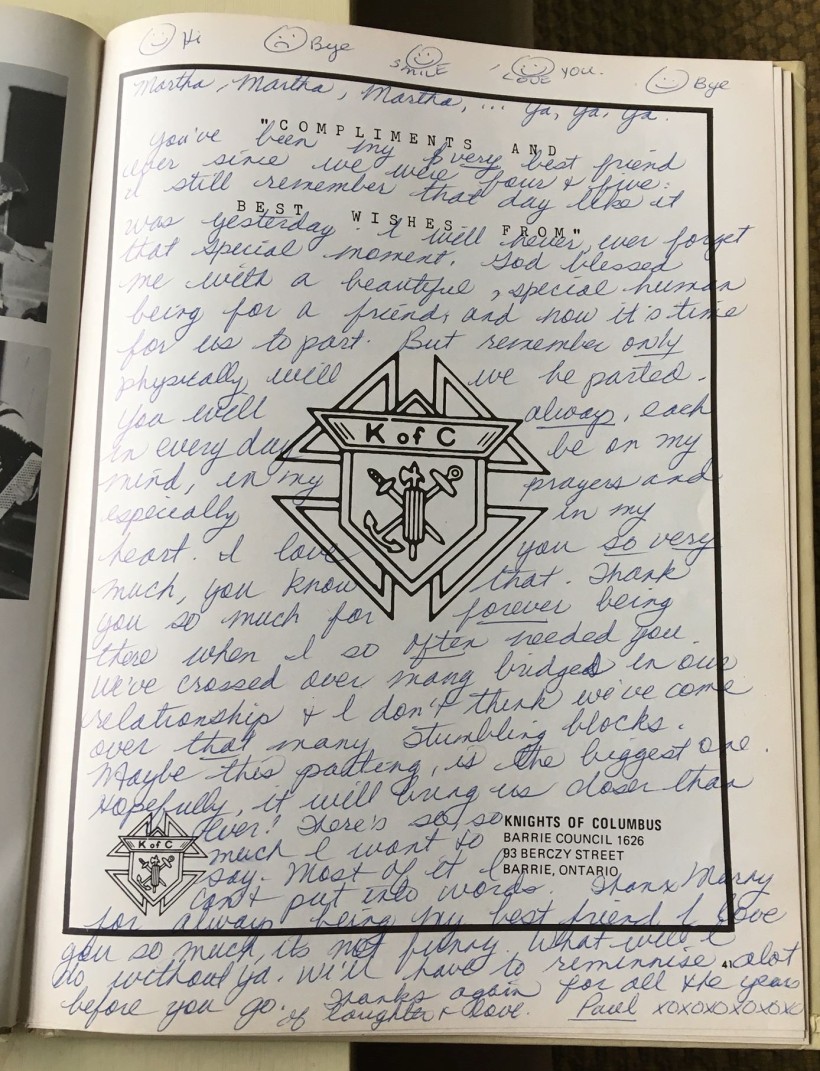 I remember one time he was hired to feed the cats at the convent on the corner of Berczy and Eugenia St in Barrie and I went with him to the massive, empty, dark gothic-style mysterious house with crucifixes affixed on nearly every wall.  Well, of course we proceeded to hide behind doors and jump out at each other and to scare each other with a well placed ‘boo!’ several times so that we were frazzled nerves by the time we finished the chore.

Paul was a ball of positive and artistic fun and a fantastic old friend of mine. I will miss him dearly and am so sorry for the loss of this incredible person. I am sorry for his Mother and five brothers and four sisters and his adoring nieces and nephews. I am sorry for Fred, his partner of twenty plus years and how he must be reeling at the sudden and unexpected loss of Paul. I am sorry for his students and for all those whom he will not get the chance to teach. There are simply no words. I know though, that his inspiration will live on in the memories of all those who loved him.

Paul Aikins was an incredible light that shone for 54 years.  I will miss him dearly.  Rest in Peace dear Paul.  Your work is done here but your legacy will live on powerfully and forever, for you have made a difference.