Memories, like wriggling worms, are unearthed regarding my time serving in the Canadian Armed Forces

I joined up in 1986.  The inspecting officer would stand very close to address me while I stood at attention and did not move, not even my eyes should shift from a fixed gaze while his nose nearly grazed my neck to catch my scent.  Nor, I knew, should I demonstrate my revulsion if I wanted to be successful.  This was in Chilliwack, Canada on Basic Training for the Canadian Armed Forces. Later I overheard him bragging about inspecting me with my puffed out chest when standing at attention. Oh brother. So began the boys-will-be-boys attitude of my time in the Canadian Armed Forces. It now angers me to realize the wrongs and subtleties of the situation.  It has taken a long time for them to unearth. I was tainted by my upbringing in a tough male environment with an overbearingly masculine father and four brothers (plus two much older sisters).

The memories of the worst transgressions had been suppressed for three decades. I have pried open the can of worms containing all of the ridiculous double standards, innuendo, gaslighting, sexual misconduct, male toxicity and worse.

The worms wriggle and remind me of another offence which had been buried. Like the time the Canadian Forces Base (CFB) Comox Accommodations Officer, a senior Captain, used his master key to enter my locked room at midnight while I was in my bed in Officers’ quarters. The head of that worm poked up randomly today. I had completely forgotten how furious and freaked out I was and how I screamed at him to just get the fuck out! I felt unsafe and exposed. There was no chain on the door. I had forgotten how I didn’t sleep for several nights after that.  Tossing and turning and hoping he would not return with his master key.  Creep!

Then there’s the time that a classmate of mine in the woods near Royal Roads Military College near Victoria, well, I thought he was a friend of mine – we had just been in the same platoon on basic training and shared many intense wins together. We both had a couple of drinks and we were joking around, bantering, sitting close to each other on a fallen log in the rain forest, just out of the circle of the campfire party that was happening for first years. Before I knew what was going on he pinned me down on my back. Kissing me brutally.  He easily overpowered me.  He was so strong! I was telling him to stop but, like a predator on prey, he didn’t. Afterwards when we both realized that he had just raped me, our friendship was over and things were quite awkward. It was shortly thereafter that I saw a photograph of myself on one of the main bulletin boards for the wing.  In the photo I was fully clothed but someone had drawn a big red circle around my pelvic area with an angry SLUT! and an arrow pointing to said pelvis. Everyone looked at this bulletin board every day several times, including the ones in charge (this was the 1980s when bulletin boards were an important tool for the passage of key information). When I saw the image of myself there like that I wept. I was enraged, humiliated, saddened and completely frustrated with how unfair things were.  HE WAS THE SLUT!  HE WAS THE PROBLEM! People actually thought it was my fault.

Another new memory unearthed itself which I will slot in here as it came to the surface of my mind months after I originally posted this.  It involved a senior cadet at Royal Roads Military College orchestrating a hotel-room drunk in Victoria, B.C. for attractive first year female cadets.  He and his couple of fellow seniors got us completely inebriated by plying us with liquor through drinking games coupled with the pressure for us to follow orders.  I recently remembered him raping me while I was passed out, then awoke then passed out again.  A shocking memory which surfaced just the other day, some 35 years after the fact.

I thank the stars that I had gone on the pill just prior to leaving for basic. (I remember the thought process all too well. It would be dangerous to NOT be on the pill if even just one man couldn’t control himself around me).  Whereas it could be the guy ‘getting off’ (a primordial physical release) but it could mean a great deal more to me: the end of a career? The horror of abortion? The facing of major life decisions on my own forced upon me by his need to ‘get off’ or to ‘put me in my place’.  I took those pills in order to not be accidentally impregnated by some too eager prick.

To add insult to injury, two years after the hotel-room drunk / rape, this same ginger-headed now new lieutenant was the directing staff (DS) on an important army course called Environmental Specialty Land in Borden, Ontario.  I don’t really know where I went in my head in order to function around him, especially when I had to receive orders from him and later be debriefed by him in a tent, alone.  I remember finding any reason to laugh and with my now husband in my same section coupled with another hilarious Cape Bretoner, I guess I just soldiered on.  I was desperate to pass this training in order to be promoted.  I had nothing to go home to.  I needed this and despite the assholes abusing me, I was good at army life.

But, for decades I have wondered why I didn’t end up finishing my degree at mil col.  Finally, in my fifty-fifth year, I have the answer.  At the age of 20  I was raped, humiliated and blamed.  My identify was stolen.  My innocence lost.  I would forever mistrust 99 percent of men, sleep as light as a feather or not at all, and lose almost full interest in sexual intimacy for decades.  Thanks assholes.  Thanks a hell of a lot.

For three years I was in a field unit in Germany.  Field unit meaning that we were quite actively practicing for war and for the resupply required. This took our unit out on exercise a couple of times per year. We also would attend something called a gun camp where we would practice shooting and other field exercises. In Valdehon, France, I was in my private barrack room one day fetching something needed when I realized somebody was standing behind me in my open doorway. He was a colleague of mine. He had wild eyes while he looked at me and I realized something was wrong. He walked towards me.  In full daylight while the rest of the unit was on the ranges, he backed me into a corner with a sick grin on his face. I was disgusted as a cold finger of fear traced down my spine.  I would not be raped again.  I put both hands on his chest and pushed him forcibly away. I told him not to bother me with that type of thing again or he would be in trouble. I knew though, in my head, that if I were to raise a stink about his behaviour it would just bite me in the ass and he would brag and swagger and nothing would happen. I didn’t want to jeopardize my standing as a woman in this unit who was holding her own.

On one of our field exercises I was in my platoon’s headquarters truck when one of my sergeants walked in and locked the door behind him. He grabbed my arm. I could smell cigarettes and sour alcohol on his breath. He was sweating. He was known to be a heavy drinker but was loved by the unit for his ability to happily handle extreme physical challenges.  We had marched the 4 day x 40 km Nijmegen marches on the same team.  I thought we were allies.  But, no.  He told me he would now have what he wanted from me. My body stiffened and I bore my eyes into his. Between clenched teeth I told him if he tried anything on me I would fucking kill him. His face froze. I could literally see the wheels spinning in his warped mind.  He stopped. He went away. Just another day for a female junior officer in a field unit.

Not all of the men I encountered were like this. After all, I married the man that I met on the first day of logistics training at Canadian Forces Base Borden. He is the love of my life and we have been married 28 years. He knows all of these details and he gently helps me through them. I am a very blessed person but even so, I have suffered. I believe that I suppressed, buried and downplayed these memories. I hadn’t been sure of the details but I just knew that it had happened.  When the class-action law suit about sexual misconduct in the Canadian Armed Forces came to me I found myself nearly catatonic with the sudden validity of the shit that went down for me when I served.  Suddenly, some of the particularities in my life made sense.  My extreme spidey-senses towards creeps, for one.  Not sleeping well was unfortunately another and the list goes on.

As a woman in the Canadian Armed Forces, on a daily basis I received unwanted attention from male subordinates, colleagues and seniors. Just last night I remembered a female senior Captain ‘trapping’ me at her apartment one night.  Me brainwashed to follow orders couldn’t leave.  Her telling me I just HAD to stay at her place, sleep in her musty, smelly bed because of the weather or some other stupid reason.  She inched closer and closer to me on her dusty, creaky couch.  Leering, smiling weirdly and breathing heavier than necessary.  Oh my fucking god.  I was gonna lose it that night.  I am still not sure if she touched me.  I just simply have not unearthed that memory yet. But there is a blank there.

There were cat-calls, lewd comments, leering, innuendo. Comments about my appearance as a matter of course and not just ‘you look nice’.  Detailed picking apart of my body’s shape and size, my hair, my face and whether I was smiling or bitchy that day. While talking to my husband (who had been my peer in the military) about this with regard to his routine experience in the military, comparatively speaking, he stated that he had none of that. He was free to do his work and more easily received accolades.  The men I worked with in the military had no troubles like mine.

Many men in the military with me at the time would be shocked with regard to my physical strength. I worked hard, (my mother’s daughter). I stayed strong, always pulling my own weight and doing the things that people said women couldn’t do like very long marches in combat attire, chin-ups and push-ups and maintaining a positive outlook even while in the shit, like digging ditches or sleep deprived. I did this because I knew that it would help me to be “respected”. I was terrified of failure.  I had no support at home in Barrie.  I would have to go back to find a crap job on a bottom rung if I failed.  It was the fear of that that kept me motivated and with blinders on. But even while pumping-off up to seven chin-ups, bar set so physically high, I needed a strong-arm boost with large hands encircling my small waist, just to reach it; even then, I could hear men commenting on the shape of my ass. 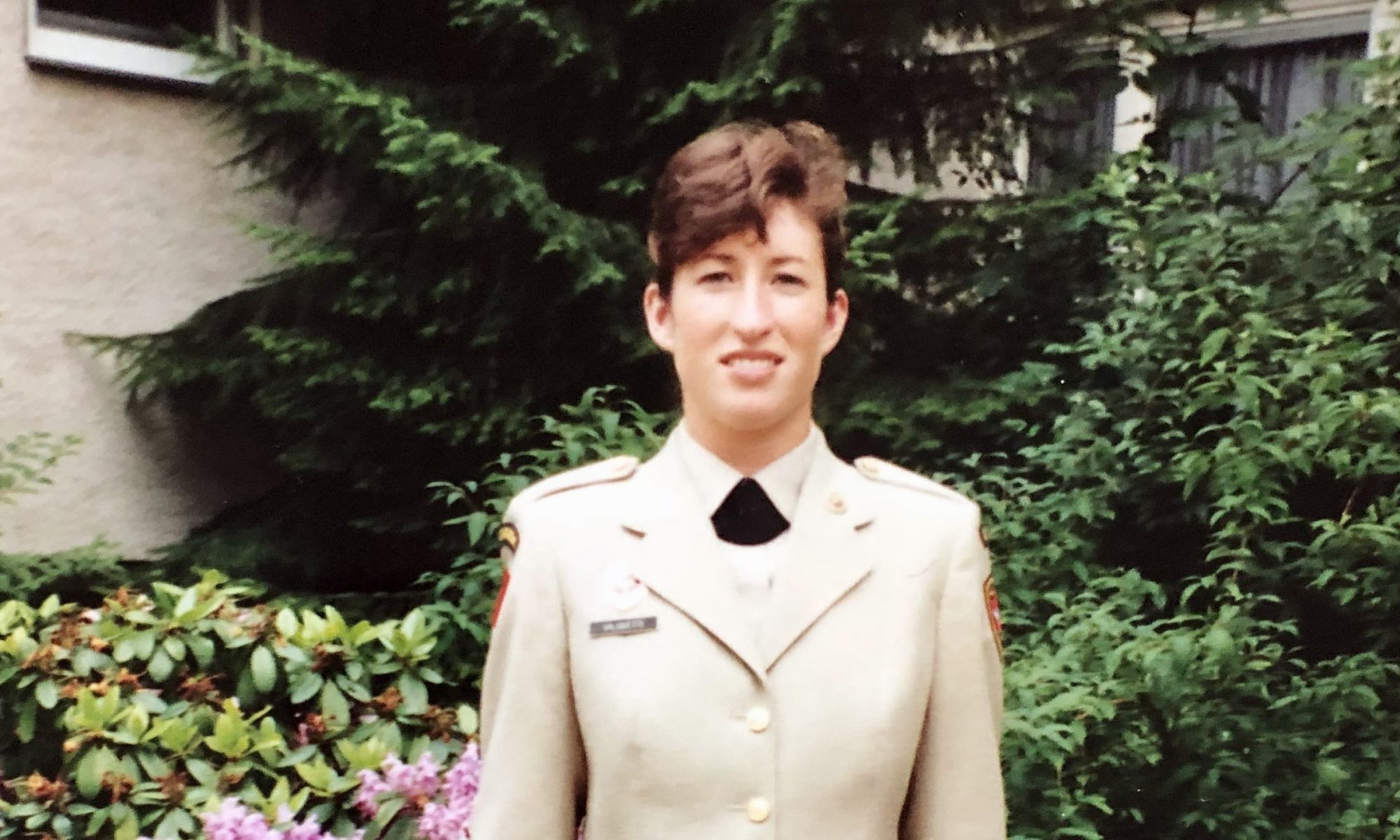