Today, we were in double digits with blue skies and ebbing tides….off to one of our many beaches to enjoy it.  Not knowing a) that this beach belonged to a pair of nesting Peregrines and b) that this would be a truly remarkable day…

We were scurrying quickly away from the possible dive-bombing Peregrine Falcons and their surely sharp talons on a local beach near Avonport, Nova Scotia.  (Peregrines are not to be trifled with, being the fastest creature on planet Earth, who can reach 320 km / hr with sharp talons and beak).  My hubby of 26 years, Dean and I had been strolling on the pebbly, blue-tinged shale beach marveling at the warm day in late May and kicking around ideas for future world travel, a topic we come back to again and again it seems.

Yes, the warm day…we have had an awfully cold spring which would have me donning a toque up until, oh, yesterday.  But today, we were in double digits with blue skies and ebbing tides….off to one of our many beaches to enjoy it.  Not knowing a) that this beach belonged to a pair of nesting Peregrines and b) that this would be a truly remarkable day.

About thirty minutes down the beach, the shreeeeeeeeek of the Peregrine.  (I have known this shreek and had heard it recently and curiously near our house in Wolfville.  That mystery was about to be clarified.)  It seems we were a little too close to their nest which was lodged up on a ledge in the sand-stone cliffs which towered over the beach.

A senior couple was coming down the beach in hats and rubber boots. Large camera had she, binoculars had he.  Pauline and her special friend Bernard Forsythe and was it truly our fortune to meet them!  Firstly warning them about the mad! mad! mad! falcons but they didn’t seem to want to turn around.  They nodded knowingly about the speedy upset pair and so, with one eye-ball peeled, we stood and talked on the pretty beach for the better part of an hour. 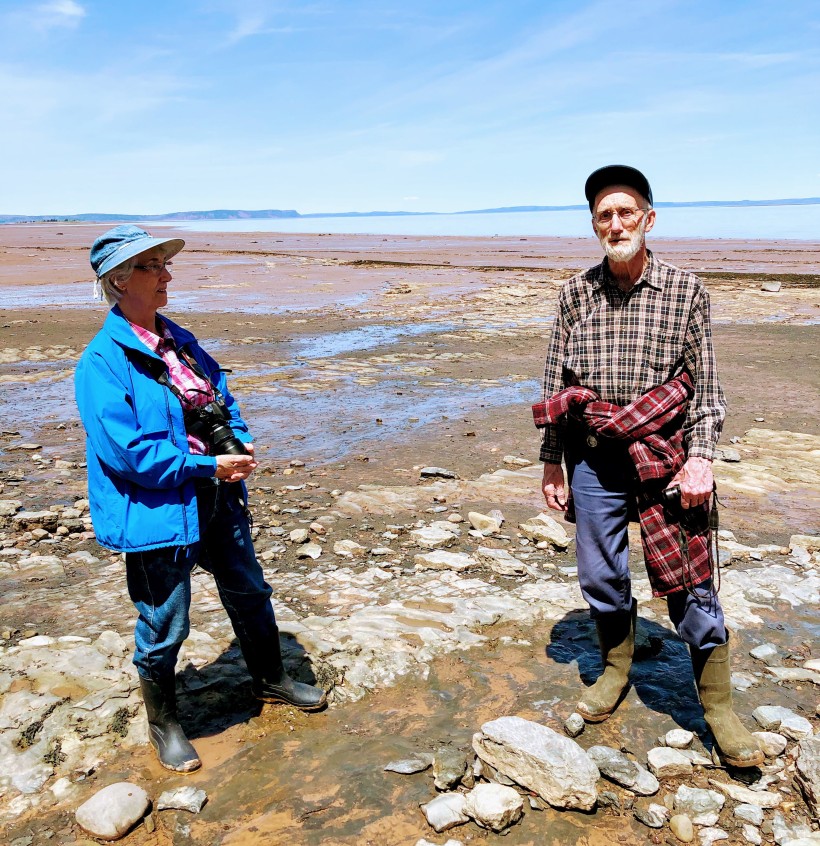 Turns out, Bernard has been a serious naturalist and birder since the 70s featured here on CBC Television.  Both he and Pauline had lost their respective mates in the last few years and had found friendship in each other through the Blomidon Naturalists Society.  Bernard told us that he is 77 and still climbing trees.  He has tagged more than 800 barred owls and routinely mounts owl boxes all over, to aid the owls in the nesting needs, now that old growth forests are not as prevalent as they once were.  Bernard kept us highly interested in the various and many conservation activities he takes part in, mainly he says, for fun!  He told us that Peregrines would have been in Wolfville due to it being on their flight path returning from the south.  That’s why I would hear them sometimes.  Mystery solved.  I made a mental note to let my friend Daisy know this.  She had wondered the same thing.

We asked Bernard if he happened to know our niece who had attended Acadia University and is now completing her masters in ornithology at York, Taylor Brown.  He said…. Yes, we met one day by chance at the eye doctor.  We were both bored and got to talking and then realized how much we have in common with regard to birding.

Dean and I were afraid to go back down the beach toward the nesting site but Pauline and Bernard assured us that we would be fine.  If we formed a group, they said, the falcons were unlikely to attack us.  I picked up a flat rock and used it as a helmet, to be extra sure.  Once near to but far beneath the nest, we were able to clearly see a proud, puffed-up Momma on the nest and a serene protective Dadda on a tree just a bit further on, standing guard.  Stoic.  Soon, Pauline exclaimed that she could see a fuzzy chick’s head moving just above the rim of the nest.  Time to leave them be, said Bernard.  They need to hunt and take care of necessary falcon parenting business and shouldn’t be interrupted too much.

On our way back up the beach, we were fully captivated by the many fascinating stories that Bernie told us about his adventures in ornithology, owl banding and nesting box mounting.  He would be called upon by Acadia University to take various students ‘under his wing’.  One such student was studying the murder of crows who would roost on Boot Island.  They would go to the island to study them together and so that Bernie could instruct the student in banding and other bird ways.

Bernard is also a wild-orchid enthusiast and counter.  We would have been at the Orchid Show at the Acadia University KC Irving centre in February when my sisters were visiting.  He pointed out that he studies and counts the wild ones though which he said involves a lot of hiking through the woods of Nova Scotia.

He then found us a highly interesting fossil of a fern and was bent over pointing at it as if he was in a teenager’s body.  This incredibly youthful senior man has done and still does many hikes and out-trips on his various conservation missions.  Now though most times with his friend Pauline by his side except when he is climbing trees.  At those times, she waits on the ground.  Both of them have a quick smile and a glint in their eye.  They are wise, vital, active, witty and incredibly interesting.  At one point, Pauline told me she wasn’t worried about the falcons dive-bombing because she was wearing blue and they don’t like blue.  Aren’t you lucky I said.  Why don’t they like blue? I asked. Only kidding she said.  She had me going and it was funny, we belted out a good laugh about that one!

Again, I felt completely privileged and indebted to these lovely folks of the Annapolis Valley where we now call our home.  They took a lovely day and made it even better, and… just by chance.

Only in The Valley.

(Peregrine picture was found on google images ~ thank you~ The other two are mine.)

Here’s another view of the area at low tide: