With the goal of getting back into World Travel now that our wee one is taller than us, we start with the sweet country of Cuba…

With our 18-year old son, Leo, having just finished up his first term of University, and his buddy, Reid, we decided to take a 12-day trip to Cuba…a non-resort trip…not exactly as strenuous as a ‘back-packing’ trip, per se, but a non-resort moving around trip none the less.  And, all in all, it was a fine adventure to finish off 2017 in a unique fashion.  Dean and I were also celebrating 25 years married and we wanted to do something special for the occasion.

We arrived in Havana in mid-December and made a bee-line first to the cadeca to change money, then to the tienda for a cold one each.  We had arranged a driver to take us to our place in Vedado, a trendy area of the city but, he was familiar with ‘Cuba Time’ and had no trouble just chilling until the four of us quenched our thirst after a long, rather sparse flight.  Don’t get me going but what the devil has happened to flights theses days?…I had told the boys of the days of unlimited free boozy drinks on flights and a full hot meal preceded by a warm towel for your face, neck and hands, blankets and pillows and head-sets handed to each traveler.  What the heck happened???  Now we couldn’t even check a bag for free.  The four of us went with carry-on only and had had our sun-screen confiscated at security.  Let’s just read that line again…our sun-screen was confiscated at security.  Why?  Well, it seems since 9 – 11, sun-screen in any family-size container, is a security breech.

Our driver happily helped us into his vintage car and off we rolled to our apartment.  Along the way, in a combination of broken English, Spanglish, gesture and sound effects, he told us about the area and his family.  It seemed that he was a nearly pro ping-ponger with four babies (who were now adults) and then we rolled passed the Mental Health Hospital and he put two bent fingers to his right temple and made a creaking sound while moving his fingers back and forth and rolling his eyes.  Ooookay.  Meanwhile, in his back seat sits me with Bipolar1.  I didn’t let on.

Our apartment was ideal and in good proximity to a landmark that we all wanted to check out.  The Nacional Hotel.  It seemed fitting to have our first mojito of the trip there.

The bartender happened to be our landlord, so he treated us to a Cubata cocktail as well and a couple of fine cigars for the lads.  His protege was quite a nice-looking guy, very photogenic, and he was fine with me snapping his picture. 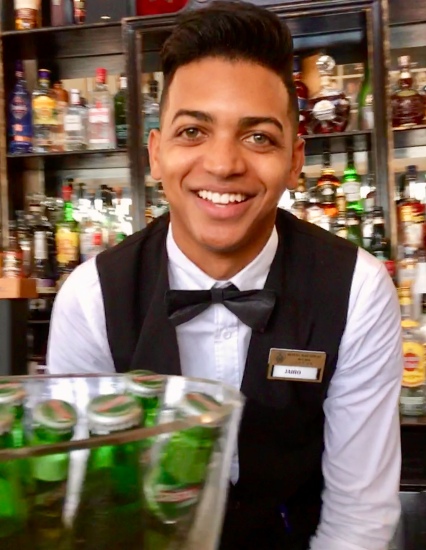 From there, we walked along the sea wall and marveled at the warm air. 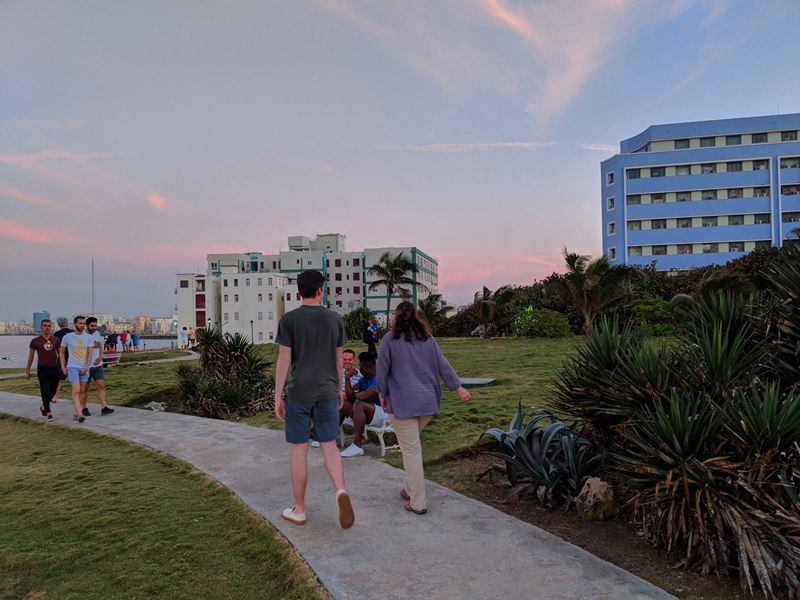 It was getting dark and would soon be time to find a place to eat.  We asked a young person who seemed to know some English.  He told us to try Bicky’s and he drew us a little map.  We walked the darkened streets with nary a flat sidewalk and several random ankle-busting holes as well as piles of dog doo and other garbage.  We found it, though.  Its neon-lighted sign beckoning like a lighthouse over choppy seas.  It was an Italian place and we were seated on the balcony.  The place was packed and we got the last table.  When my food arrived, it didn’t look like much: penne pasta in a cream sauce.  Oh my.  It was fabulous.  All of us were happy with our food, but mine was outstanding.  I could barely speak due to my tongue being in love with the taste.  A nice omen of our meals to come.

The next morning, the Senorita arrived to cook us breakfast and we had fun trying to understand each other.  She had not a word of English and would just raise the volume of her Spanish to make us understand.  Luckily, my previous study on duolingo and our old phrase book which we had used in Central America  when Leo was four helped. As well, I employed a healthy and hilarious amount of gesture which I was comfortable with since learning conversational American Sign Language when Leo was a baby. I taught her how to do eggs ‘over-easy’ using my hand as the spatula in my gesticulating.  We had wonderful foods for breakfast: fresh tropical fruit, coffee, toast, eggs, freshly made tropical juices.  Wonderful.

Off we went to walk to the book store which was a couple of miles away in a quiet part of the city.  We walked past many pastel-coloured stucco homes, newly painted with groomed yards and straight fences, often directly beside a very old, grey and crumbling crooked house.  It was odd and interesting.  When we got to Cuba Libro the bookstore, 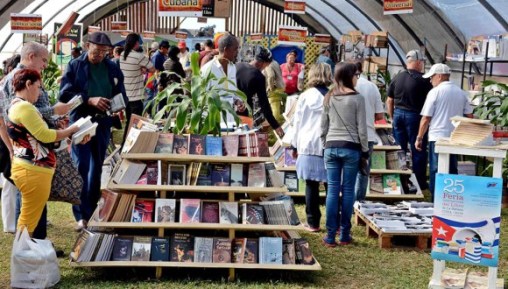 we were amazed at the wonderful books as well as other offerings there: cookies, coffee and a clean bathroom. It is owned by an expat and has a lively community following with various clubs meeting there and tours too. The lovely server told us how to get a car to take us to Old Havana and so next we were climbing into a red 51 Chevy with clear vinyl covered leather seats.  It was mint. 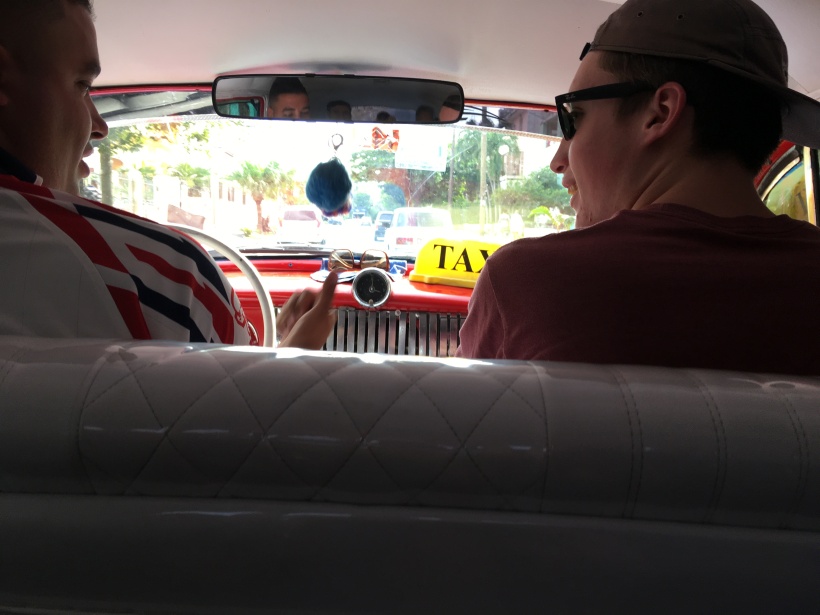 Because we so enjoyed this man, with no English but a lovely manner, we negotiated with him for the 4.5 hour ride to Trinidad de Cuba for the next morning.  Then we walked around seeing the sights of Old Havana and drinking in the ancient feel of the place. 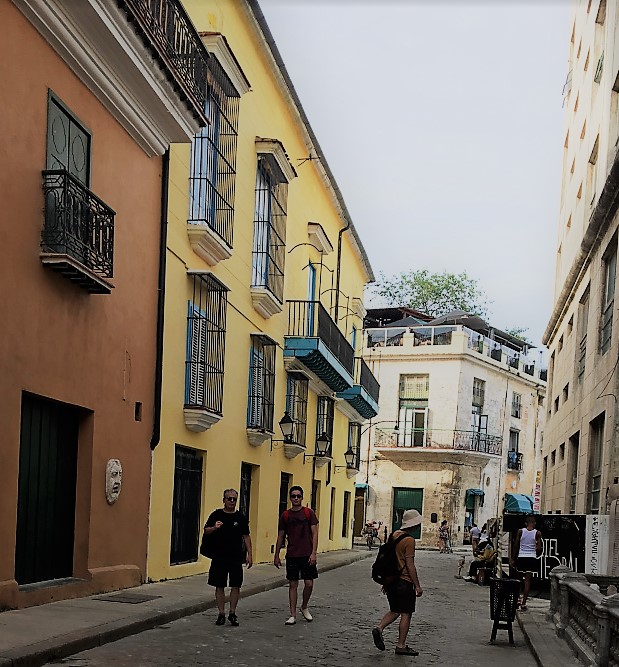 It was commonplace to hear and see vendors yelling and selling their wares which ranged from brooms (which I REALLY wanted – joking) to lettuce (which I also REALLY wanted) to baked crackers and pastries, even home-made ice-cream and shaved meat sandwiches were being sold but the sandwich maker was without gloves and my Western sensibilities would not allow us to avail of them.  I was quite intrigued with the cart of lettuce, and other veggies.  It looked so good and yummy. 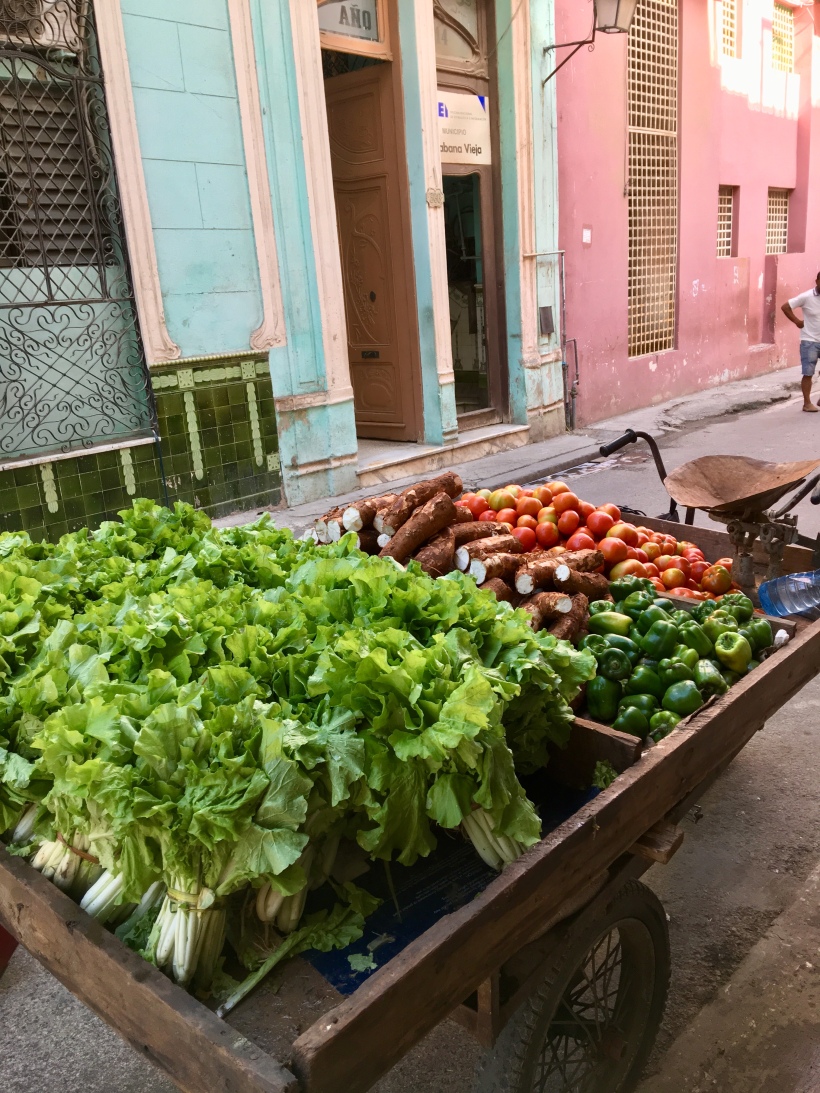 Our ride to Trinidad (well, Boca actually which is just south of Trinidad) was uneventful except for many bumps due to the non-existent shocks on the 51 Chevy. There were very few vehicles on the highway but we would see horse and buggy from time to time, many sugar-cane fields and not a single fast-food place like there are along our highways.  We stopped about half-way for a bano break and the boys had a quick sandwich.  When we arrived, the taxi-driver asked at several doors to find us a place to stay.  We wanted two rooms with their own bathrooms.  We found them and we met an east-coaster named Erika who was quite eager to get to know us and to talk a blue streak.  While the Senora of the Casa made us a roast chicken lunch, we went swimming in the bay across from our rooms.  Erika came along and continued to ask intriguing questions and I found myself filling her in on our previous travels because she was very interested.

After a fine lunch, we grabbed a taxi to the big beach, Playa Ancon, and had a very sweet time throwing frisbee, 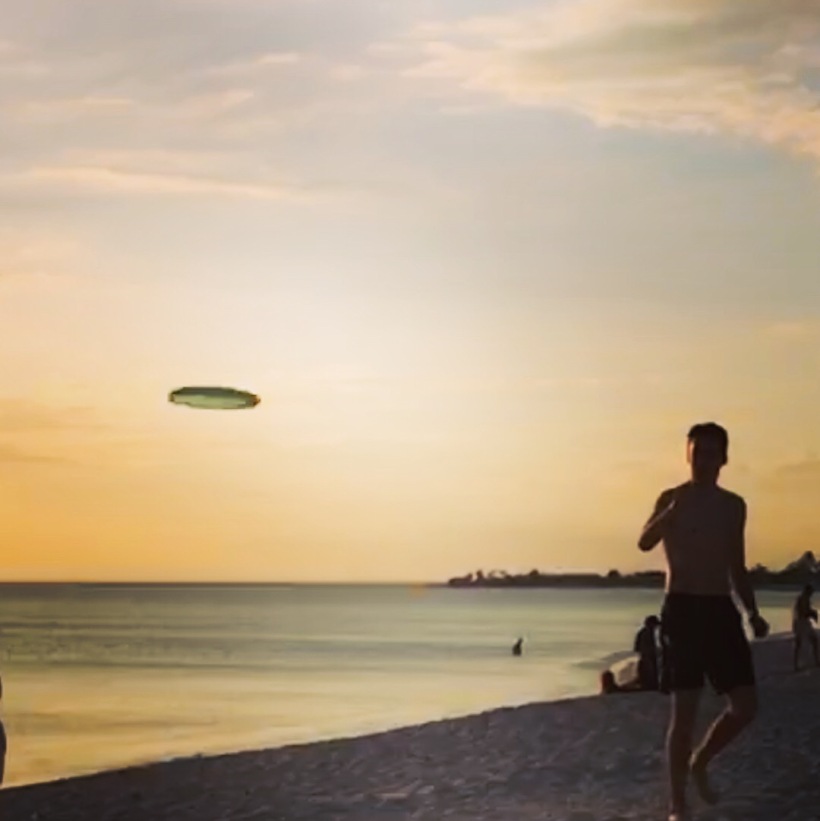 walking down the beach and when Senor came along to ask if we wanted a drink, I sprung for mojitos for all (perhaps a wee bit extravagant but, sometimes that’s just the way it goes). 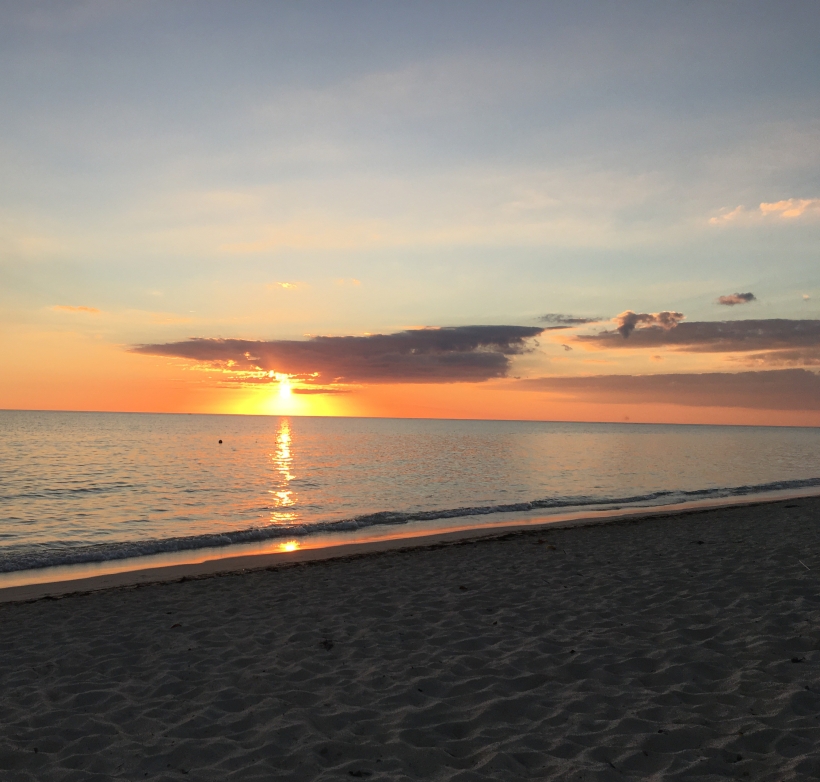 When the sun began to go down we grabbed the last taxi for the 10k back to La Boca and sat on the front porch. Next, there was a bit of a sing-song, as it turned out that Erika could sing beautifully with a rich voice and was very talented on guitar.  She had won an East Coast Music Award and such. http://erikakulnys.com/

Later, all the young folk went off to the Salsa House in Trinidad for a wild time.  We heard them getting in a few hours later and it sounded like they were going to have some stories for us in the morning.  Which they did…along the lines of how much rum one can drink before feeling rather sick…and such.  And, they enjoyed dancing their legs off!

We spent the days either on the beach at Playa Ancon, 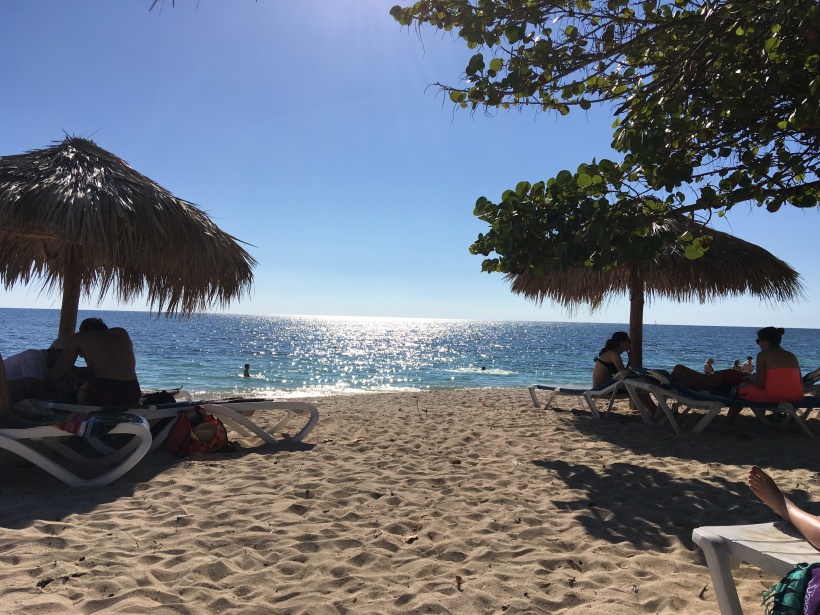 or walking around Trinidad 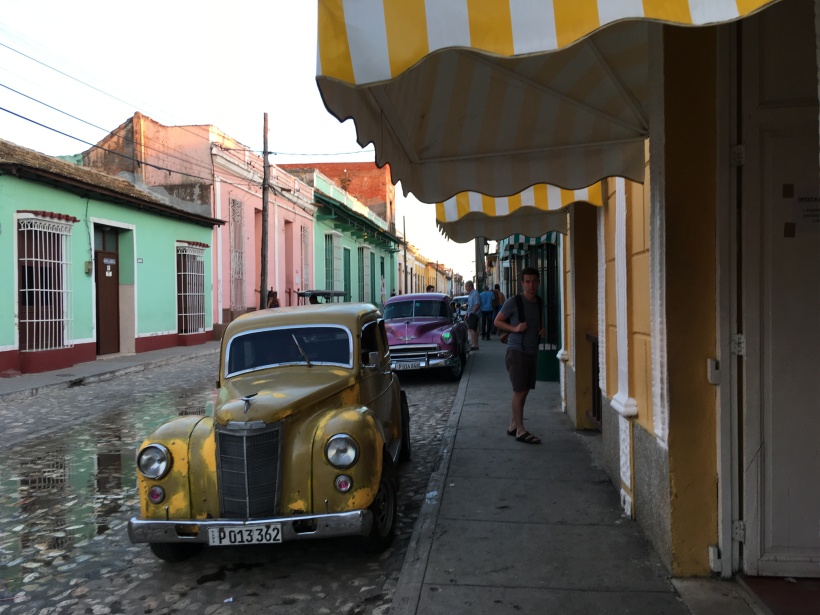 or hiking in the hills and swimming in small pools near the water falls. 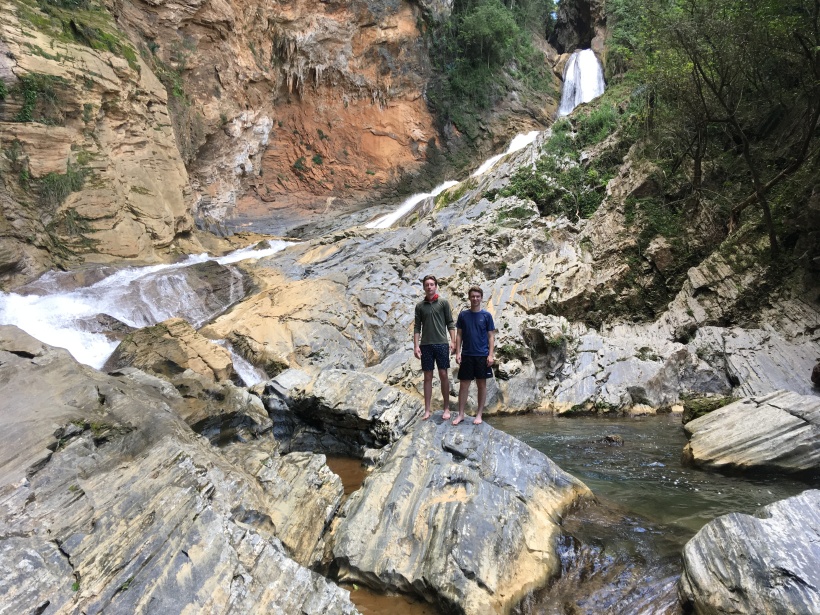 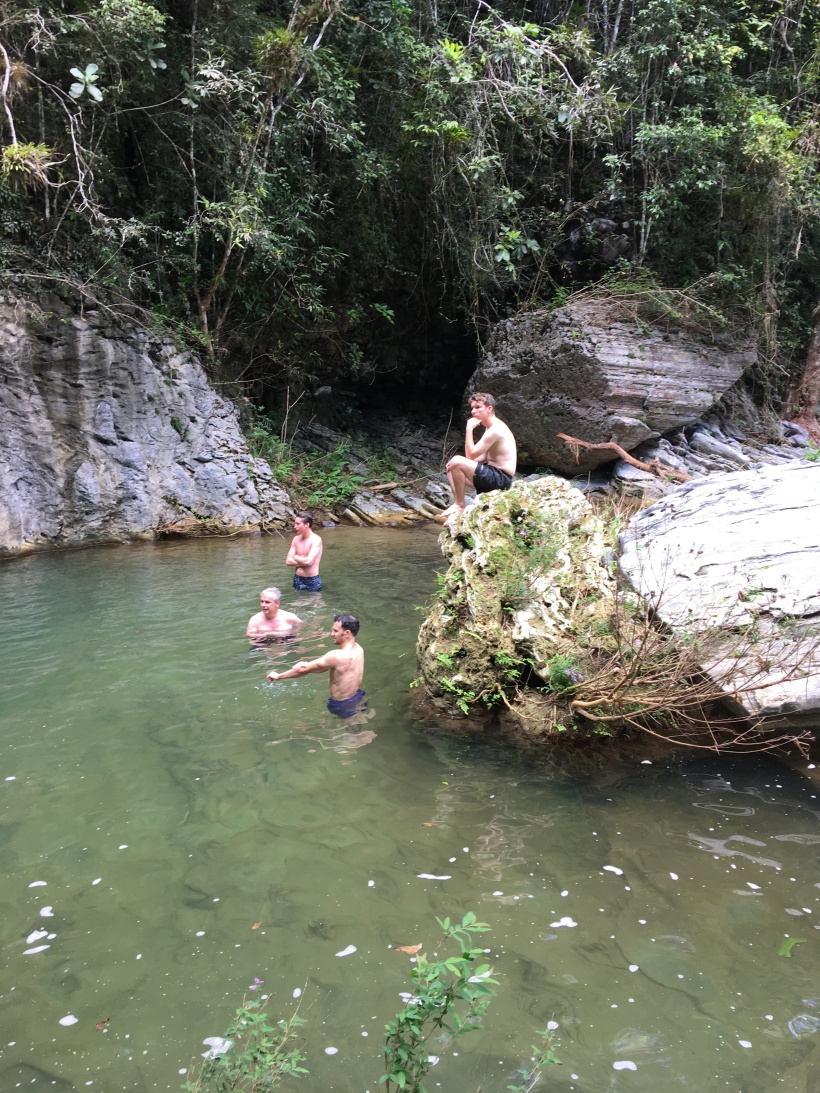 Leo jumped in from a high ledge and it was really cool.  I should comment that the second hike was very hard.  Walking way down, down, down to get to this pool and waterfall and then up, up, UP to get back to the top where our loyal taxi-driver waited.  My heart nearly burst.  I couldn’t remember a more challenging hike, even when we trekked for 30 days in Nepal…I had been a lot younger then.  That could account for it, I guess. 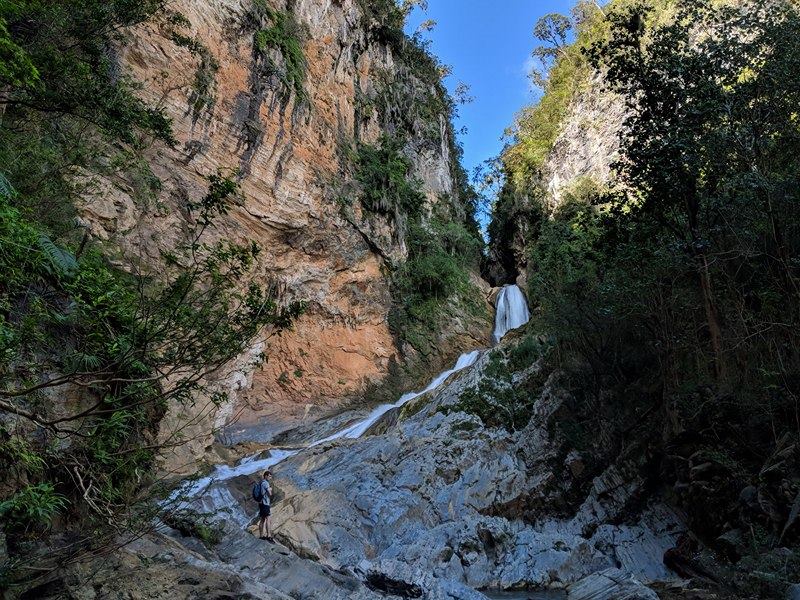 One very good aspect though was that Dean surprised me with a lovely ring for our 25th anniversary, as we sat watching the boys by the waterfall.  Doesn’t get any better than that, in my world.

We also ate a lot of really good food in many different establishments.  Our Trinidad host, Rebeca, was so sweet to us too. She made us an elaborate breakfast each morning which included tropical fruit and juices, fresh-baked pie and pastries, omelettes, coffee with hot milk and chocolate.  She would hug and kiss us regularly, in keeping with her affectionate culture and because we would smile and she could see that we were content.  One morning she had Reid in a tight squeeze to her ample breasts.  He surfaced saying he thought that was called ‘a motorboat’.  We laughed. We breakfasted on her upper terrace and she went up and down the stairs at least a dozen times for us and not allowing us to help. Her granddaughter stole my heart and I gave her little gifts. To return the favour to us, Rebeca gave us a flask of Havana Club and a bottle of red wine.  These would have cost her a heck of a lot and were very generous gifts.

In Trinidad, the boys went to the Iberostar Hotel a few times in order to avail themselves of wifi.  It wasn’t free but nor was it too expensive.  There was also a pool table there which they were able to use a few times.  They would also have a cappuccino or a beer while they got their fill of social media and connecting with loved ones back home.

In the blink of an eye, it was time to head back to Havana to prepare for our journey home to Canada.  Rebeca’s son would take us back to the big city.  Without a word of English, we made our way with him.  He was quite a good driver.  He charged us a very fair rate for the trip.  No English but a lovely persona and a big, quick smile.  If you ever go to Trinidad de Cuba and need a place to stay, have the taxi take you to Casa Rebeca on Cienfuegos.  Highly recommend!

Back in Havana, we found rooms in Centro, just outside of Old Havana.  The landlady was a hurdle and it was apparent that she was a money grabbing opportunist behind her big fake smile.  Can’t have the good ones every time, I guess.  We walked the streets and looked at art, tasted various beers, Dean got a hair cut, and we tried a variety of restaurants and then it was time to grab a taxi to the airport.

Adios Cuba.  Until next time. 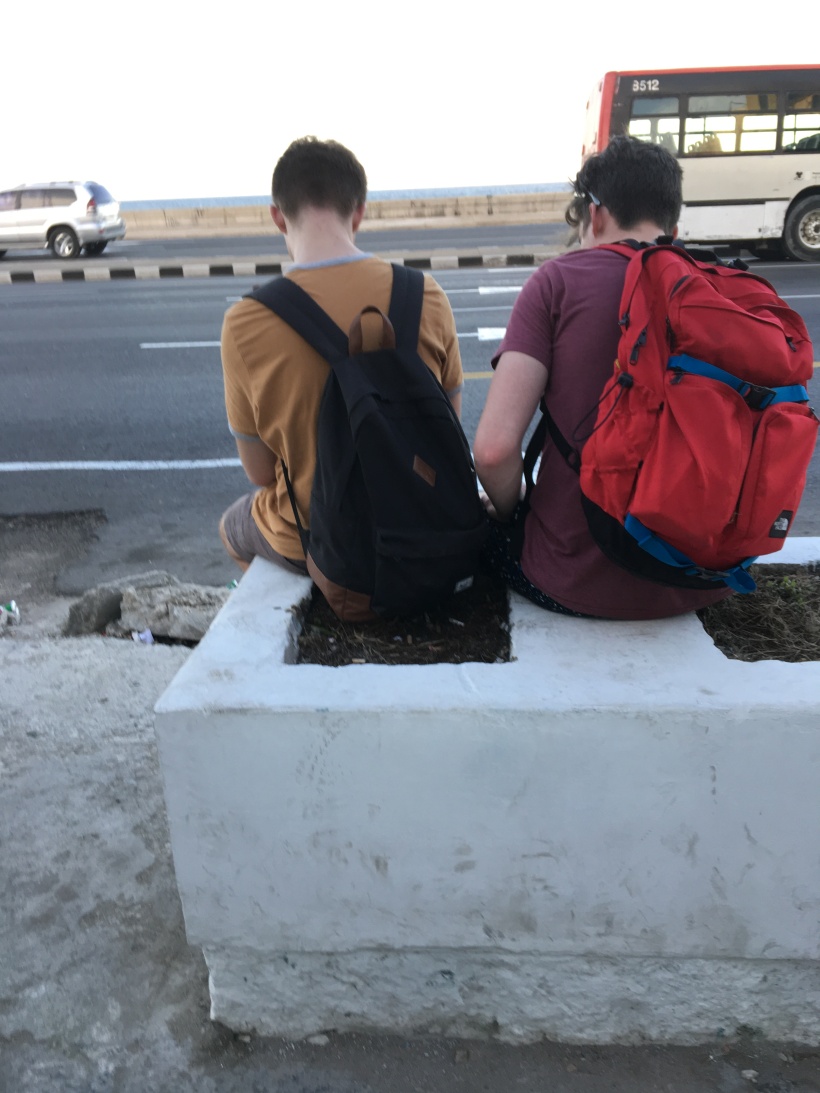