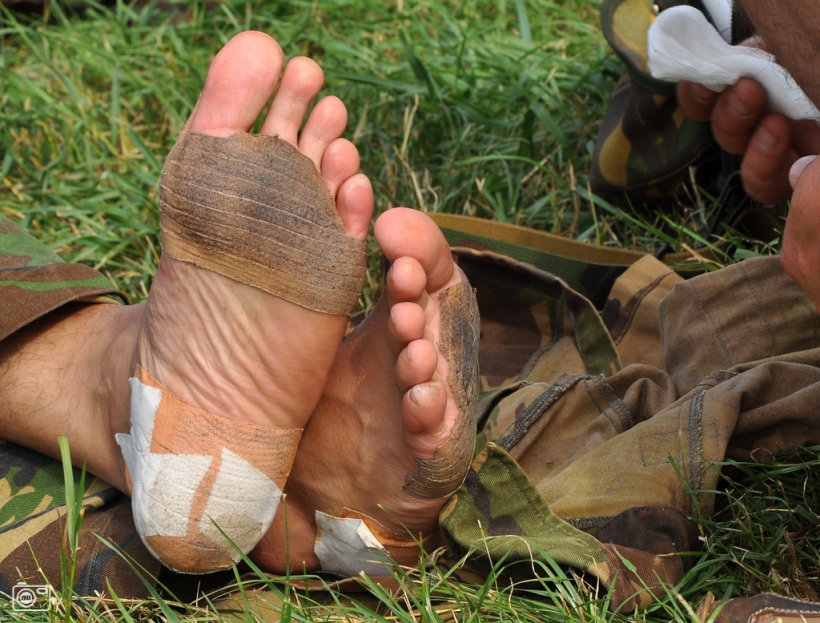 Forty K per day for four days over the rolling hills and through the city streets of Netherlands, in 1989 I did the International Nijmegen Marches with a military team…

In the summer of 1989, while posted in Lahr, Germany, I was asked to join a marching team as the token female, to head to Holland for the four-day International Nijmegen Marches, which is the largest multi-day marching event in the world.  It has happened every year since 1916 to promote sport and fitness.  Military participants walk forty kilometers per day for four days in a row, in formation of 20-soldier teams.  Almost fifty thousand marchers now walk this walk every year.

At the time, I was a transportation platoon commander in Supply and Transport Company in 4 Service Battalion in the Canadian Army.  To put it simply, I had a platoon of 30 soldiers who drove MAN 10-ton trucks (like these bad boys below) 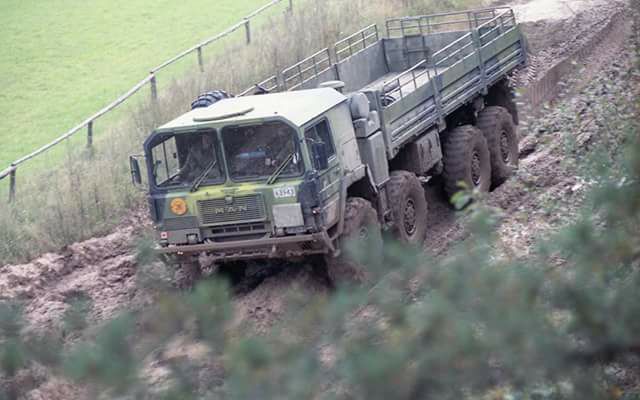 which would carry supplies: ammunition, water, rations, various items, and spare parts needed by both forward fighting troops and other support units within the Brigade. During peace time, we conducted training operations such as weapons use, field exercises and fitness competitions to improve morale, esprit-de-corps and to prepare for future deployments.

As the Platoon Commander, I routinely conducted all manner of administrative duties, personnel evaluations and reports, test and inspection readiness, subordinate training, orders groups, equipment maintenance checks, and many other duties in accordance with my rank and position.  In a field unit, staying physically fit is one of the requirements of the job. Five days per week, we did physical training first thing at 7:30 am.  Joining the Nijmegen March team covered the fitness requirement and provided an adventure and a trip to another country, all expenses paid.

A month prior to the event, the march training began.  In combat boots and combat uniform, we would form up, two by two in lines and walk for eight to sixteen K out through the German countryside, along farmers fields, river-side pathways and over trails through small woods.  Back then, in ’89, there were no ‘devices’ to listen to, other than the odd Walkman, which almost no one had anyway, and nothing like spotify or itunes or podcasts to listen to. Marching in formation was a little bit like torture.  The back of one head to stare at and exacting ‘left right’ pace to maintain for the whole two to three hours.  Thankfully, there were a few songs we would sing for a while. One soldier knew all the words to ‘Alice’s Restaurant’. You can get anything that you want at Alice’s Restaurant…(by Arlo Guthrie).  It was only slightly annoying to listen to it after about the second time, but, well, what could be done?  ‘Just take one more step. Now, one more step,’ became my mental litany. Most of the time, I was extremely bored and under-challenged by this walking.  Not only that, I couldn’t easily ‘talk it up’ with the soldier beside me because of the need to maintain a professional ‘distance’.  Sometimes being a female officer could be both isolating and awkward.  It was tough to stay positive and pleasant but that became another litany.  Stay positive and pleasant.  Just one more step. Stay positive and pleasant. I chalked this training up to good discipline.  One could never get enough discipline.  Am I right? 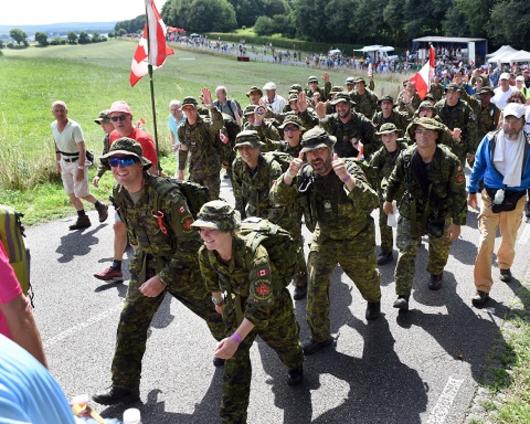 We went to Nijmegen by bus.  It took about six hours, due North, and when we arrived, there was already a tent city erected by the forward party and we were assigned to our tents and to our cots, within the tents.  We were to begin Day 1 at 06:00 the next morning. The route for the four days formed somewhat of a clover leaf out and around the city of Nijmegen.  The route wound its way through the Dutch countryside with its green pastures, cows grazing, chickens running, fences diminishing into the distance. 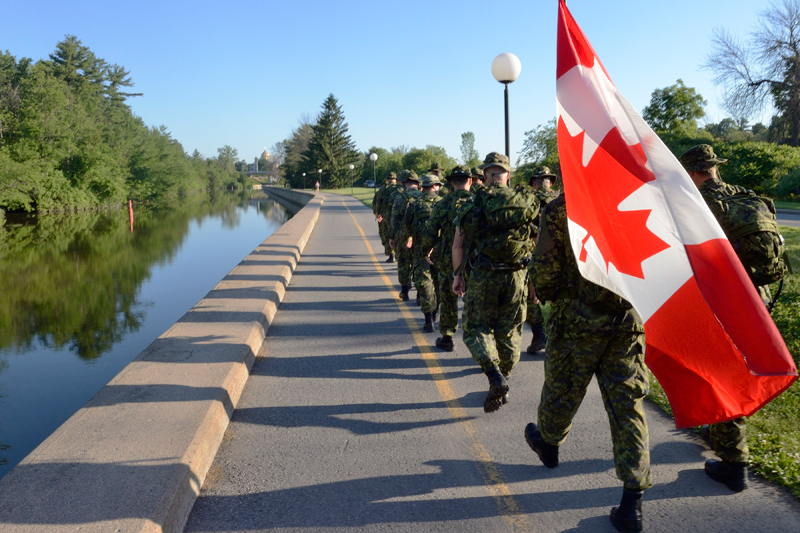 One time, a civilian marcher was playing the bagpipes and low and behold all the cows in the field got curious and began to trot toward the fence to more closely see the man. Thankfully, at the fence, the cows stopped and then just stood and stared, chewing their cud, looking bemused and fluttering their long eyelashes at the bagpiper.  Could it be that these ladies thought the bagpiper was a well-hung bull ready to service them?  One will never know.

At ten K, twenty K and thirty K marks, we would come upon our unit’s flag and see our kitchen trucks, first aid station, water stations and porta-potties in a field.  We were well taken care of.  There would be a menu of foods or snacks and drinks for us, including huge schnitzel sandwiches.  I don’t think I ever went hungry, not once, while in the Canadian Forces.  We would sit on the grass with our plate and drink and rest for twenty minutes before beginning again.  One doctor attached to our unit even organized a child’s swimming pool with ice for us to soak our poor feet at the end of the day. 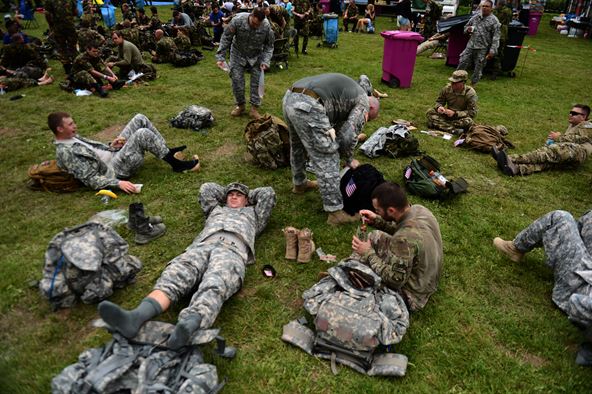 While resting, we could also inspect our feet for the dreaded blisters.  I am pleased to report, I didn’t get a single blister.  Fortunately, a friend had told me of the wonders of moleskin and how to wrap it over the heel in such a manner as to provide fool-proof protection against blisters.  Secondly, Vaseline on and in-between the toes.  I now pass this on to anyone I know going on a long walk.  Blisters are nothing to sneeze at in a long, multiple day march,hike or walk.  Good feet are crucial to the success and comfort of the walk.  Bad feet can be debilitating and very painful especially if they also become infected.  Game over.  On training at CFB Borden called Environmental Specialty Land, which I did just after Nijmegen, our final test of the course was to complete a night march from Stayner, Ontario to the back gate of the Base, about 30 K with packs and rifles.  We started at 11:00 pm and we walked all night. Our friend Andy carried a huge boom box up on his shoulders and had it cranked and playing ‘FINAL COUNTDOWN’ by Europe, the whole way.  Song finishes.  Rewind.  Song begins again.  We were all very sleep deprived because we had been in and out of the field for weeks, up all night sometimes on missions, patrols and then duties and classes during the day and with no real time to recuperate.  Myself, I was literally falling asleep as I walked, while carrying my rifle at the ready.  There was this line that they would shout whenever someone was in danger of hitting the deck due to exhaustion: ‘SOLDIER! MAKE SURE YOU HIT THAT DECK BEFORE THAT WEAPON DOES!!!’  Kinda sums it all up, doesn’t it?

Anyway, the Captain of this officer training course was Airborne – an elite group of Infantry. His feet turned to hamburger during this march. He had to get in the first aid truck and be driven to base.  Embaaarassing.  It wouldn’t have been so bad but he had bragged about what a great and fit soldier he was. Of course, HE didn’t know the secret of the moleskin. Myself, Dean and Nee sure did, and anyone else who cared to be prepared.  I had just finished the Nijmegen marches a couple of months prior, so I was fully aware.

Back in Nijmegen, by the time we walked into the camp at the end of the forty K march, we were done.  I would soak my feet in ice water for ten minutes, show the good doc the mysterious lump on the top of my foot which may or may not have been a stress fracture, he said.  Having eaten at all the stops during the march, I certainly didn’t need more food, so I simply made my way to my tent, tucked my combat boots under my camp cot and fell fast into a heavy sleep until the next early morning. 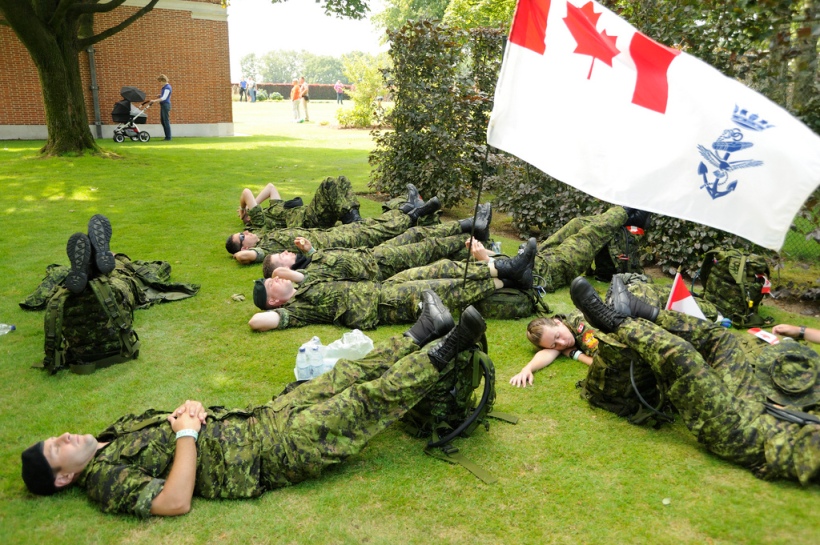 I like this picture I found of a female soldier fast asleep on her arm.  There was no staying awake during rest breaks.  The need to sleep just took over.

We Canadians are very much loved in Holland because our troops liberated the Dutch from the Germans in World War II in 1944.  So, anytime we would come across large Dutch civilian marching groups, they would holler and cheer and sometimes sing a song for the Canadians.  Weren’t we proud to receive these accolades.  We would all smile and wave bashfully and then take one more step.  Just one more.

Everyday there would be at least one city to march through. There would be a lot to see and invariably young children would run along side our team for a bit.  We would give out those tiny Canada flag pins and then receive a sweet smile, sometimes with missing front teeth.  A few times, a tiny warm hand would slip into mine and we would walk together for a few minutes.  Priceless memory.

While marching, there would often be other Canadian teams from other units unrelated to ours, except that they were also Canadian and also posted in Germany.  For instance, there was an Armored Team, an Infantry Team, a Signals Team and the like.  I remember that I so enjoyed when the French Canadian Teams would be near us.  They would invariably be singing their old regimental songs which I found to be incredibly moving and haunting.  They would often pass us singing these songs in their deep rich voices. Sharp beret with dark-haired head tilted to the ground.  Arms swinging.  Boots hitting the trail in perfect synchronicity. It was mesmerizing.  One song they sang which is about the building of the dam across the Manicouagan River in Quebec, was especially sorrowful. If I try hard, I can still hear their deep voices singing this incredible song by Georges Dor. It is a song of longing, boredom and homesickness.

After the last day, there was a huge party in which a lot of Heineken were quaffed and then, the next morning, we boarded the bus back to Southern Germany.

Nowadays, there are so many folks wanting to participate in the Nijmegen Marches that they have set a limit of forty-seven thousand marchers per year.  Doing this march was an honour and is a fond memory. 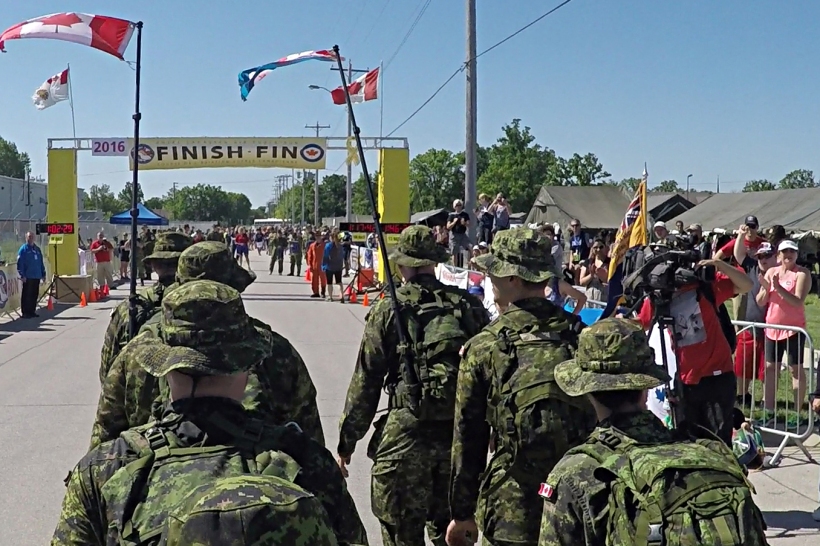 (All photos courtesy of google images — I would have loved to have some of my own photos but I didn’t own a camera back then and there were no smart phones either.)