“The two most important days in your life are the day you are born and the day you find out why.” —Mark Twain.

My baby, the one who arrived in a maelstrom back in 1999, well, he is now a tall young man.  Intelligent, kind, fun-loving, adventurous, athletic and handsome. (But, this is his mother writing.  What else would I say?)

He is finished high-school and getting set to go off on a huge adventure and then to University.  I have five weeks left with him before he departs.  My heart is breaking and I am tearful, scared and joyful all at the same time.  I never thought I would be this way, but, then again, I never thought I would be in a straitjacket in D.C. either. That’s life, right?!  It sneaks up on you and BAM!

Your son, your only, is leaving for University.

But, what about that big adventure you ask?  Leo applied and was picked to be one of forty-five youth to assist as crew on a tall ship from Halifax to France.  Yes, that’s right. Across the Atlantic. Thankfully, there is a professional crew as well and they will be teaching the youth the ropes, literally.  They will do duties:  watch, galley, cleaning and maintenance duties.  I am sure there will be lots of time for fun too. They will dock in Le Havre in Normandy France and spend five days in France before flying home to Canada at the end of August.

About ten days later, Leo will leave our house for University.

What happened to the days of Buzz Lightyear?  Or the days of hiking, just me and small him and the dogs in the parks, on the beaches, up the hills?  The days where every playground became a wealth of potential fun and that he would point at and cry hopefully, “Can I play in the playground, Mom?” and inevitably exclaim: “Mom, I’m having SO fun!!”

The holding of my hand. His, so small and soft and warm.  The moments of insecurity when he was a toddler and would wrap himself around one or both of my legs as I stood in conversation with someone. The morning greeting, “It’s morning time, Mom!” The sleepy, cuddly story-times, sweaty fevers, rosy-cheeked kisses and all the stuff we learned together.  The tears are streaming as I ask, “Where did the time go? and WHY does this hurt so bad??!”

Oh dear, did I spend enough time with him?  Did I do enough for him? Did I help to shape a good young man?  Will he find his way?  Will he find a love?  Will he miss me?

He wrote his last exam of high-school today and had arranged with two good buddies to go camping in New Brunswick at Fundy National Park.  Both my husband Dean and I were home for lunch (we come home every day for lunch due to our Simple East-Coast Life) and so we witnessed the flurry of activity in getting ready for the big out-trip.

Leo was walking back and forth to his room grabbing all that he could imagine needing for the trip.  Meanwhile, I set up a sandwich-building smorgasbord on the kitchen island with large slices of buttered Italian bread, sliced cheese and tomato, ham, bologna, bacon, mustard, mayo, and lettuce fresh and green from the garden.  While Leo ran around, I invited the two buds to build their sandwiches and dig in.  I wouldn’t want to see them on their way without a good lunch.

The curious thing happened.  While Leo ran around, his two friends and I had a nice little visit in the kitchen.  Mainly talking about some hiking memories that Dean and I made at Fundy National Park while going Across Canada in Betsy and then about their plans for the fall. Leo came out to the kitchen and snagged the last two slices of bacon for his sandwich, which I then volunteered to build for him, as I could see he wasn’t even close to being packed and ready yet.

Just then, we realized that Leo’s phone was vibrating on the corner cupboard. Leo looked at it, then reached for it.  From where I stood, I noticed that his hand was slightly shaking as he reached for his phone. My heart caught in my chest to see that hand, the very one I knew so well and had held time and again including when he was fourteen and he reached out for my hand during a movie the two of us went to see together…shaking.

Looking at the display, he said, “Dad, this is the call about the summer job.”  When he looked up, there was a nervous strain on his face that instantly caused an anxious reaction within me. You see, Leo is a very laid-back kinda guy as is evidenced here.

Almost nothing phases him.  But, I had to remind myself to take stock: he just wrote an exam, the last of his high-school career;  a couple of nights ago, he found out he was selected for the Tall Ship experience to cross the Atlantic; there was a summer job being negotiated; friends were waiting for him for a couple day out-trip; Prom in a few days; he would be leaving for University in late August and he hadn’t even eaten lunch yet.  So, perhaps a slight tremor of the hand and bit of a strain on the face is understandable. Regardless, the reaction within me was hard to deny.  All I wanted to do was make it better.  Take away his strain and nerves.  Jeepers.  I’m gonna need to chill.

Prom was fantastic and the prom parade went off without a ‘hitch’ and is featured in this little video:

When we first moved to Halifax, we lost a second-trimester pregnancy, Leo’s little brother, and it was heartbreaking.  So…I am really hoping that the ‘loss’ of Leo to the great wide world (although surely tough on me) will be wonderful.  That we shall see him spread his wings and soar through life, having adventures, doing good and following his dreams….TO INFINITY AND BEYOND!

(Photos by the author)

My son, Leo’s favourite toy of all time was Buzz Lightyear, the action figure who emerged from the 1995 block buster movie Toy Story.  He wanted the action figure very badly.  We would make special trips to the toy store just to look at them and imagine owning one.  The weird thing was that we had more than enough money to buy one but, at the time, I just didn’t think it would be good for Leo to have everything he wanted as soon as he wanted it.  I thought it would be a learning experience to wait for it. To me, the Buzz Lightyear action figures seemed pretty expensive retailing for $75 plus tax, at the time.  I thought that it would be too much to just go ahead and buy him one.  Don’t worry, Leo didn’t want for much.  He had a lot of toys and his own room with a double bed, a hand-made quilt with a space theme from two of his Aunts in Newfoundland, and, he had me all to himself as I was a full-time stay-home mom for his first five years.  He was much loved.  I just didn’t want to spoil him.  There’s a fine line. 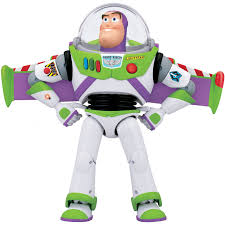 One day, Auntie Bonnie came to visit and we decided to head to Kitchener for the day and go thrift shopping at Value Village and then have lunch.  Thrift shopping is so much fun.  The thrill of the hunt for something of great value at a low, low price.

We were wheeling our way around the store.  Leo was getting a ride in the cart and as I say, we were just getting warmed up when…low and behold, on a shelf with many other toys…there was…

BUZZ LIGHTYEAR!!!  The one and only.  And the exact size of the ones he had seen at the toy store.

Suddenly, everything slowed waaaaaay down as I subtly took in my surroundings and competitors – surly many children would want this toy for thrift-store prices.  There were a few other people in the same aisle. If you can believe it, there was a boy closing in on the same area where we were.  The boy was looking at Buzz. Then, I could see his small hand reaching toward Buzz.  My hand was reaching.  Then, his. Then, mine.  I didn’t want to muscle a toy away from someone much, much smaller than I, but then…the boy reached for the frisbee instead. Whew!

My hand grasped the cool hard plastic of the toy’s mid-section.  I held him up.  He was perfect, except that someone else had loved him quite well before. It was obvious. Because he was missing a boot.

Leo didn’t care.  He grasped Buzz and hugged him tight.  ‘My own Buzz, Mommy?’ he asked.  ‘Yes, sweetheart, your own Buzz.’  He was one happy little gaffer that day.

Buzz did not leave Leo’s chubby fingers for days.  It was as if he was glued there. If someone asked about the missing boot, he simply explained that Buzz had lost a boot on a dangerous space mission and then he would hold Buzz tight and sail him over his head with a sonic whooshing sound, ‘To infinity and beyond!’

One day, Leo was running in our house on the ceramic tile and took a spill.  There went Buzz, flying across the room and smashing on the tile.  When Leo retrieved him, he was missing an arm.

I did a bit of research and found out that the Disney Thinkway Toy Company had an office located in Markham, Ontario which was just around the corner form Dean’s office at IBM.  I called the company and explained that we needed some repairs done on a very much loved Buzz Lightyear toy. They said to simply bring it in and leave it with them for about ten days.  They would see what they could do.  We explained to Leo that Buzz had to go in for repairs.  After awhile, Leo understood and said goodbye to Buzz.

The next day, just before they closed, Dean walked into the Disney Thinkway office with the old, broken Buzz.  The man behind the counter said, ‘You must be the people who called about repairs to an older Buzz Lightyear.’  Dean nodded and held up Leo’s Buzz.  The man nodded knowingly, seeing the missing boot and missing arm.  He then said, ‘I told my boss about your wife’s call and how your son loves Buzz so much,’…the man then reached under the counter and handed a shiny BRAND NEW Buzz to Dean. No charge, as long as they could have the old toy to study.  Dean gladly surrendered old Buzz.

Leo awoke in the morning with the shiny new Buzz beside him. You never saw such a happy youngster. Not wanting to run with Buzz anymore, he shuffled into our room and sang out, ‘it’s morning time Mom and guess what?  Buzz is all fixed up!’