Highlights: the food! Oh my, such wonderful food.  The hikes!  Oh my, such gorgeous seaside scenery.  The colour!  Oh my, such bright and vivid colours every which way we turned.  The accented lovely way of speaking!  Oh my, so sweet: how ya be, me ducky?

We were on the escalator heading down to street level at the St John’s airport in early June.  Excited to start our eight days in Newfoundland’s east.  We had butterflies of excitement and I think we may have been holding hands, my love and I.  Dean, hailing from there, was all smiles to be ‘down home’ again to the salt air and the fog, the twang and the good-naturedness of Newfoundlanders. (Pronouced: newfundLANDers)

I was casually scanning the crowd on street level.  My glance fell on a dark-haired man sitting in profile to us on a bench against the wall.  He was smiling, looking around wide-eyed and boyishly swinging his legs back and forth.  Could it be?  I was almost sure it was him but what luck would that be?!  Michael Crummey, I said quietly.  I nudged Dean beside me.  Michael Crummey, I indicated with my chin.  We both said aloud for him then: Michael Crummey!  And he looked at us and smiled with recognition as we arrived at his level.  He and Dean had attended Memorial University of Newfoundland (MUN) back in the eighties and played a bit of soccer together.  We had attended Michael’s readings on his books and listened, rapt, while he read from his latest book the last time: Sweetland when he visited Wolfville’s Acadia University in the recent past.  We had pints and shared stories and jokes at Paddy’s Pub.  We were nearly best buds, the three of us.  Well, not really, but it was certainly wonderful to see his smiling face.  He was awaiting his mother and then she joined us and we were introduced.  A moment later we were offered a ride to our hotel and off we went in his car while Michael told us of places not to be missed and I jotted notes on a scrap of paper in the back seat…this was sure to be a great trip and it was that for sure.

Highlights: the food! Oh my, such wonderful food.  The hikes!  Oh my, such gorgeous seaside scenery.  The colour!  Oh my, such bright and vivid colours every which way we turned.  The accented lovely way of speaking!  Oh my, so sweet: how ya be, me ducky?

We checked into Hotel Newfoundland and were offered all manner of treats from the lady going by with a cart from the exec lounge.  Don’t want to throw it all away, she said.  We loaded up, then stepped out to look at Signal Hill via the crooked little neighbourhood of Quidi Vidi. Boardwalk clutching shear cliffs and spray of salt water with a backdrop of the huge deep St John’s harbour and small icebergs off in the big blue. 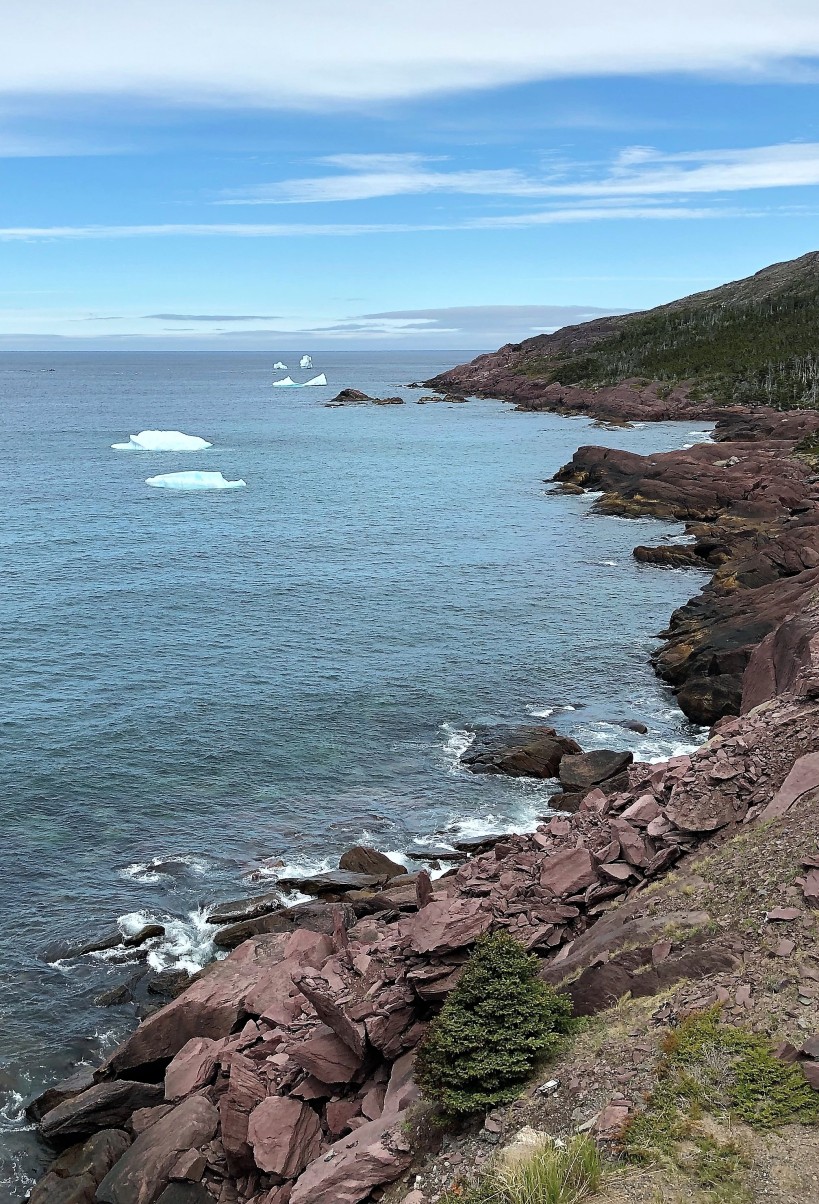 Colourful ancient houses clung impossibly on the hillside of rock and steps galore! as we made our way for the next two hours. Exclaiming at the beauty all the while and sweating while climbing the flights of stairs up the rock face.  I would not have wanted to be the builders of that staircase.  Newfoundlander builders wouldn’t have thought twice about it, likely.  I recalled my barrel-chested, cheerful brother-in-law in his good black leather jacket, hat less, stepping out into the driving, sideways freak icy rain one Christmas in Corner Brook. It’s not FIT! he turned, smiled and shrugged at us watching from the damp doorway or Dean’s eldest brother.

Next, a meal which had us enjoying the lightest, sweetest fish and chips ever and a pint of the local brew at The Duke.  Simply awesome.

Day two, we walked all over the pretty and old, twisty knotted downtown and then up around the University Campus after an incredible brunch at The Rooms Museum Cafe overlooking the harbour.

We met Bill, Dean’s friend from University, at his house and then dropped everything to go take a look at Petty Harbour.  The sun just happened to come out while we were there.  Afterwards, we ate a wonderful steak supper with Bill, then walked back to the hotel still in the day light.  Gotta love the long days of summer.  We then fit in a pint with Michael Crummey and told the tales of our lives, three glasses clinked, then three heads together as we caught up on all the news at the Ship Pub.  We laughed at the memories of Codco who used to hang out at The Ship Inn which was sold and so imaginatively renamed.

Day three, we picked up our rental car after a scrumptious meal at Chinched and off we went to tour the Irish Loop with a stop to hike La Manche trail, part of the East Coast Trail system and see the suspension bridge out in the ghost-town wilderness.  Later that evening, we found a nice B&B and just got in the door when the rain began to pour down.  The owner was a small lively man with a few good stories for us.  Then we enjoyed some rest.

Day four, we ventured into Tickle Cove and did the little trail around the pond 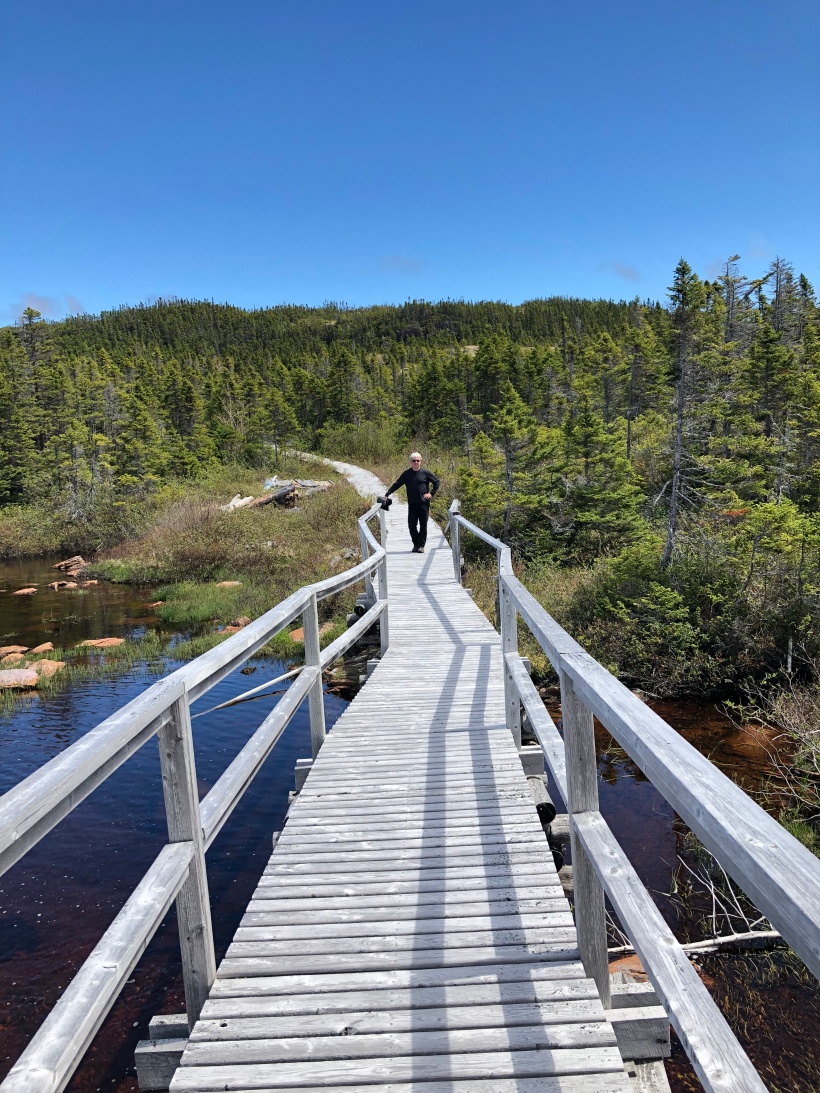 then had a dessert and tea at Maudie’s Cafe, which was sweet.  Later, we found a small hotel room on Bay Roberts and walked for a ways to see the old churches, enjoying a pint overlooking the bay on the route back.

The next morning we were nearly ordered by the hotel manager to do the Shoreline Walk, which we are so glad to have done.  Simply beautiful, with its old stacked rock 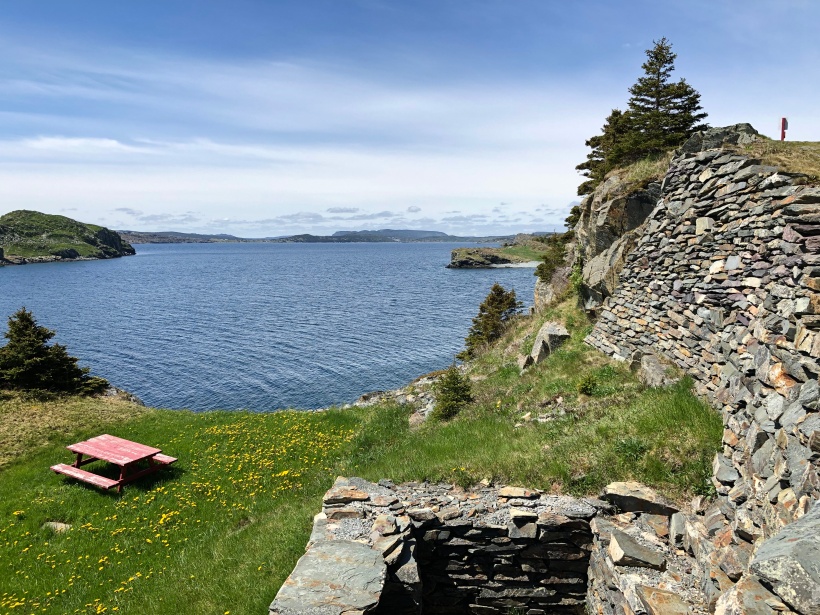 foundations and stone cellars from before the town was moved further into the crook of the bay.  At the end of the two hour hike, we came across a diner and enjoyed touton (pronounced TOUT-on) BLTs and fish cakes, the server so talkative she forgot to take our order for several minutes.  It was scrumptious.  There, we overheard an exchange that we are still chuckling about. The server asked a guest how he wanted his eggs.  The Newfoundlander answered: I don’t want to be any trouble but, I’ll have one scrambled and one poached. but I don’t want to be any trouble.  Pause.  The server stood with a look on her face, searching his for a glimmer of fun, then all erupted in laughter.

Day five, we pulled into Trinity and booked a room for two nights in a large house with many rooms all with ensuite bathrooms.  It was like a hostel for adults, said Dean.  We enjoyed swapping stories with some of our house mates and then had food and drink and a stroll around town, marveling again at the use of colour.  Why so much colour we wondered?  It was so that the seafarers could find their way home in the fog, b’y.

Day six, we did the Skerwink Hike with its sea stacks and rugged coast, ending the trail beside a pond with a resident otter who made himself known.  This is my pond, he indicated with his snout held high and in our general direction.  Later that evening, we found our way out to the CBC TV Miniseries site of Random Passage

and were tickled to be the only folks there.  I had read these books and LOVED them, a quarter of a century ago living in Corner Brook and being new to the culture.  They shed a ton of light for me. 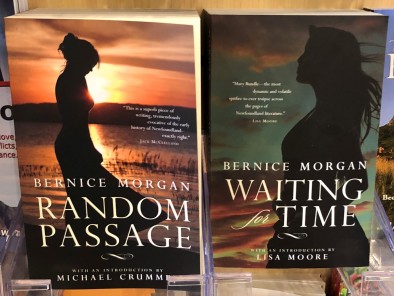 Day seven, we were back to St John’s were we met up with one of Dean’s nieces and had tea while catching up on all her news.  We had walked around Quidi Vidi pond to get to her at a little cafe, but first we had met Dean’s friend Bill at The Mallard Cottage for a pint and an incredibly delicious lunch.

Day eight, we were packing up to catch our plane back to Nova Scotia.  Our little tour of Newfoundand’s East coast had been amazing.  Colourful, sweet, homey, rugged and beautiful.  We shall return.

All photos by MMV