I am from Ontario and Dean is from Newfoundland.  Leo was born in Virginia.  How did we make our way to a small East-coast town and how did it become our home in 2003 when Leo was four?

We had been living West of Toronto in a country property for a couple of years.  We had bought it upon returning from two years in Virginia where Leo was born.  (And what a birth it was!! A couple of stories from Virginia: Prune Juice & Pregnancy (age 33) 😳and  Locked Up in D.C. 🔐 )

While there, Dean was working at a huge, multi-national corporation and his commute was 1.5 hours at high speed across the top of the city on the 407 doing about 140 km per hour.  He soon over-taxed the engine of his vehicle and it began to need a lot of oil.  That may have been the straw that broke to camel’s back because, it was about then that I told him that this lifestyle was just not working.  Although I had all kinds of time with our son and we had a big country house, we had large week-end long parties for family and we had Neighbour Night gatherings, his work life and commute was not what I wanted and he, being quite exhausted by this point, seemed to agree rather easily.  I had come up with an idea for an exit-strategy.  Ask for a transfer to their East-coast office.  Even if it had to be on our own dime, it would still be quite welcome.

Sure enough, the powers that were, accepted the idea and said we could move East as long as it was at our own expense.  Too easy for two former Logisticians! On-line, Dean found us a furnished garden apartment right downtown Halifax near the large public gardens and we were allowed to have our two dogs and cat with us.  We packed our things and sold the house.  We arrived on the East coast, in Halifax, and just breathed a sigh of relief.  Immediately we noticed the sweet nature of the people.  They were prone to smile and chat and just be sweet, almost all of the time.  Even when walking the hounds in the pouring rain, I would see folks and they would smile at me.  This was such a gift to me, the jaded upper Canadian.  Also, I was in the early stages of pregnancy and feeling a bit off.  I would take the dogs out before Dean left for the office so that he was home with Leo.  I would hope and pray that this had been a good move for us.  Sixteen years later, I can say that it certainly was.  Without a doubt.

Two years went by.  (We had lost the pregnancy, and that had been a very sad and traumatic event: The Loss of Dane (age 35) 💔)

We had bought a Halifax house (2 story salt box) but, we were not yet feeling that this was the situation that we wanted.  Dean’s company began to offer some employees an exit package if they would quietly go away.  Dean and I thought it would be a perfect time to do that extended bit of travel we had wanted to do.  Four months in Mexico and Central America.  Could we really make that happen?  With our four-year-old?  The planning began, and it was extensive.  We bought our flights into Mexico, to arrive at Guadalajara….

While away on our trip, we took the opportunity to talk about what we REALLY wanted in our next living arrangement.  We made a simple list:

Getting back from Central America we decided to take day-trips to all of the various towns around.  We spent a day in Antigonish – too far North; Mahone Bay and 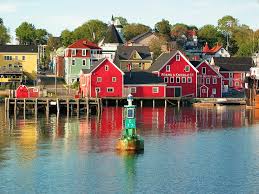 Lunenburg – too quiet in the winter; Truro – loved the park, but not quite right; Parsboro – too far from everything.  Hubbards – too small.  Then, we rolled into Wolfville….it was

just right.  Instantly we felt at home.  People were everywhere, smiling, chatting, drinking coffee and discussing things. The energy was palpable.  The students were all over the University green.  It was April and Spring was springing and everyone was out and about.  We walked on the dykes and my cell rang.  It was my sister Eva calling.  I tried to explain to her the phenomena of the dyke-lands (now a World UNESCO Heritage Site).  She would see them for herself when she visited in March, she said.  We had a wonderful day and were quite hopeful when we left to return another day, just to be sure.

A few days later, we had another sunshiny day and took the opportunity to drive back out to Wolfville.  It was only an hour away.  We pulled in to a curb-side parking space in front of a Real Estate office on Main Street.  I was the passenger.  I looked at the window to see a small, hand-written notice done in a Senior’s hand:

I absolutely knew what this meant.

We would be moving here and taking this summer rental. It was another one of those forks in the road mixed with serendipity showing a pattern that I knew was pointing us in the right direction. As I picked up my cell to call the number, cautious Dean says: ‘M, we can’t take this place.  We’re not ready to move to Wolfville.’  All I had to ask was: ‘Why not?’

The elderly gentleman on the phone had a cheery German accent.  I told him we had read his notice and that we were interested in the summer rental.  I said: ‘There is just one problem….well, actually two.’

I told him, ‘We have two large dogs.  Would they be a problem?’

Two minutes later we pulled into the driveway of our new summer home which boasted a beautiful view of Cape Blomidon and the Minas Basin which was an off-shoot of The Bay of Fundy.  We got the dogs and Leo out of the wagon.

While our new landlords were watching, Grizzly saunters over, backs her ass up and proceeds to pee on their basement window.  I was mortified… for a moment.  Hubert and Suzanne just chuckled.  They had lived interesting lives and seen it all.

We moved in in mid-April and a few days later after putting my resume in to a few places, I got a call that I was being invited for an interview at Paddy’s Pub, downtown Wolfville.  I hadn’t stepped out to work in six years.  Overjoyed, I found myself jumping up and down in sheer delight at the possibility of winning the position.  I was clapping and jumping up and down and smiling so widely that Dean just looked at me and smiled.  He knew it was going to be a good move and he was very happy for me.  With Dean able to stay home with our four-year old Leo, it would be just lovely to step out to work, knowing that the boys would be together.

I worked the lunch shift and was trained in a couple of days.  I was told I would be working on the deck or in the hall for most of my shifts. Translation: many stairs. Many steps. Crap tips.  They could have told me I would be working in a shit-hole; I would have been happy.  In my mind, my getting this job was instrumental in us transitioning to Wolfville.  I met and worked with some great folks at Paddy’s and we made it our business to have a good time a work – finding any excuse possible to laugh.  We had a great team and we all backed each other.  I served almost every soul in The Valley and therefore, met a good slice of the population.  This helped with making good friends and connections in a new Province.

For a year and a half, I worked almost every weekend and many nights per week, missing supper with Dean and Leo and bed-time with Leo.  It was tough, physically draining work.  Sometimes customers were hard to deal with and sometimes it was funny and sometimes it was emotional.  One evening, the place was dead.  It was a Tuesday shift and I was working up front.  I saw a customer up by the front window.  I walked up to the table with a menu and my face must have fallen because I recognized the man at the table.  He was a small man with narrow shoulders and a cute chipmunk-like smile.  He had been a colleague of mine in Germany when I was posted there as a Captain from 1989-1992.  He had actually asked me out one time and I had turned him down.  So, this guy looked up, recognized me and with a look of horror on his chipmunk face says: ‘M, what the hell happened to you?  The last time I saw you, you were an Army Officer doing well in your career.  Now you’re serving tables???’

I almost began to cry, this insult cut to the quick.  I gulped and waved my hand at him and said something like: ‘Oh, we just moved out here and this is a stop-gap until we have time to find better jobs or start a business.’

A year later, Paddy’s had a fire and closed.  I was out of work.  Gulp, again.

Next, we rallied and started our business which is now over a decade old.  It is going well.  We have never looked back and continue to be happy and content in our sweet little East-coast town.  Our son, Leo, who started here in Primary (kindergarten) has now grown up over six-feet tall, attends Acadia University here and…

he is still walking distance from school.