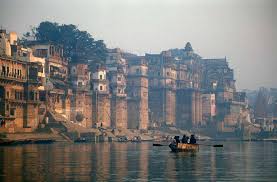 We sat on the ancient stone steps in the early morning and watched in fascination as the pilgrims bathed in the holy black waters of the Ganges.

We arrived at the holy river of Hinduism, the Ganges, in Varanasi, India at 4 in the morning.  We had been on an all-night converted school bus from Nepal. (see post Namaste, Nepal (age 30) 🙏)  We sat on the ancient stone steps and watched in fascination as the pilgrims bathed in the holy black waters.  Some of the pilgrims wore long lengths of fabric wound around their sinewy bodies.  They methodically performed the rituals and prayers, their lips moving silently as they cupped water in their palms, raised them and poured it over their heads.  To my husband Dean and I, at dawn in the incredibly exotic country of India, on the steps of the Ganges, it was out of this world to witness.  I wasn’t sure if I was dreaming or not.

From there, we hefted our packs onto our backs and walked up into the crushing crowds of Varanasi to find a place to stay.  We had our guide book (remember, there were no cell phones or TripAdvisor back then; this was March 1996) and after about five tries and many exhausting steps, we managed to find a very inexpensive hostel that looked clean and suitable.  Once there, we immediately purified some tap water in our Nalgene water bottles using our trusty iodine drops that took thirty minutes to kill off any major critters in the water.  This chore would be repeated several times each day, as it was all through Nepal.  Before that, in Australia (see post: We’re Not in Canada Anymore…this is Oz (age 28)) we had drank tap water and a fair bit of beer, with no issues.

I should mention here that, although unsavoury to write about, Dean and I had picked up some kind of bowel parasite in Nepal.  Likely during the trek when dousing our heads in mountain run-off streams.  On a few occasions, I let a bit of water into my mouth.  I’m sure Dean had too.  Said parasite was doing a serious number on us physically.  We were

nearly emaciated.  I grabbed Dean’s upper arm one day to find my fingers almost wrapping all the way round.  Scary. I wasn’t sure how much longer we could backpack – that is how weak we both were getting and with bad stomach cramps.  There was also the obvious need to use the toilet a lot and with considerable urgency at times.

Anyhoo, we enjoyed the city, walking around and seeing the sights.  We visited markets and bought fruit and nuts from vendors.

We drank many a fine lassi (yogurt and fruit smoothie-type drink).  Indians do yogurt incredibly well. 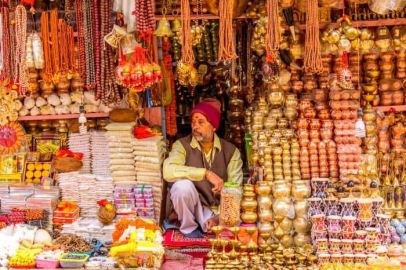 SONY DSC
Next, it was time to go visit the majestic Taj Mahal.  So, onto a bus we climbed for the eleven hour ride from Varanasi to Agra.  It was on this ride that we met an Indian-American family who were visiting India as tourists.  They told us many wonderful tips and tricks.  One of them was to order ‘the thali’ to eat, and always to eat it with yogurt, as yogurt would cool the palette in case of too much heat or spice.

I just have to say, there was nothing more delicious and satisfying to us than this incredible meal on a stainless-steel tray.  Dean and I were overjoyed every meal time to get another chance to eat another thali.  We indulged in a thali each at the lunch stop enroute to the Taj.  Our Indian-American family joined our table and our education of India continued. It was fascinating.  Again, it dawned on me that one of the best things about world travel were the folks we met along the way.

Finally, we reached the outskirts of Agra, where we could now see the Taj in the distance. 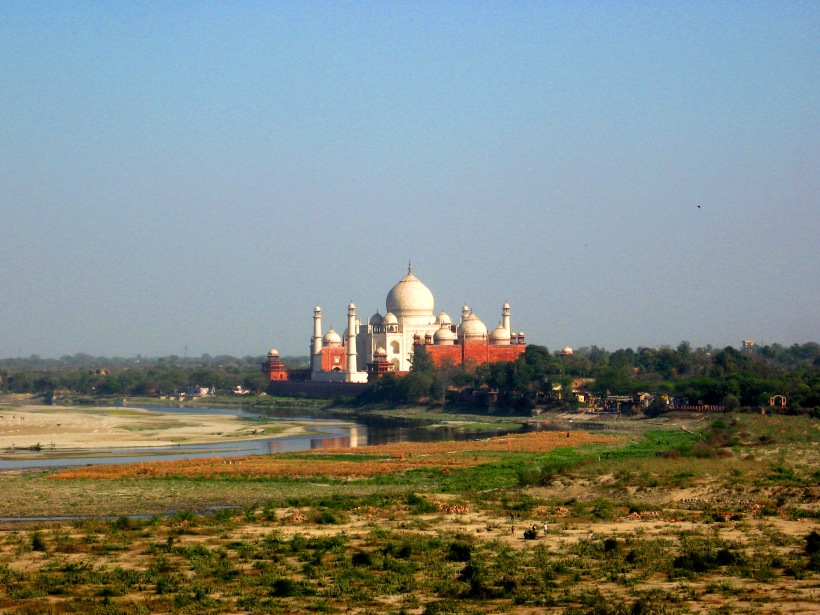 But this is what it looked like up close:

This incredible piece of architecture was built between 1632 and 1647 by the Mughal Emperor Shah Jahan. The Taj Mahal was dedicated to Jahan’s favorite wife, Mumtaz Mahal.  It is shrouded in mystery, optical illusions, inset gems and the deaths of its many builders. It is a fascinating place and we thoroughly enjoyed our time there.

After Agra, we spent a week in New Delhi.  We took the train and it was also other-worldly.  There are a myriad of ticket classes you can buy, the worst being third class. We were on second class and it was dusty and dirty, but okay.

The Indian train system is a marvel of efficiency and engineering.  There is a network of over 65,000 km and 7,000 stations.  At one point on our ride, the train came into a station where as soon as the train stopped there were scores of vendors selling their wares at the window, all yelling to announce their wares.  Everything from safety pins to hankies to tea which is called ‘chai’.

“CHAI! CHAI! CHAI! cried the Chai-wallah, approaching with a large steel bucket of chai and a tray of little clay cups.  We each took a cup of the sweet, spicy, milky tea through our window. It was only lukewarm, and went down fast. When we passed the cup back the chai-wallah, he smashed them on the tracks.  A split second later, a lower cast man scrambled onto the tracks to collect the pieces. It was explained to us that the collector would sell those pieces back to the potter who would turn them back into little clay cups, and in turn, sell them back to the Chai-wallah.

Suddenly, Dean jumped up and said, “I’ll be right back”.  He jumped off the train and, looking out the little window, I saw him over at a take-out window, buying two white boxes of food for us. He ran back and sat down.  It was then that I realized I had been holding my breath.  If the train had started to leave while Dean was getting the food, we may have never seen each other in India again.  Such is the vast and convoluted system of Indian trains.  Add that to the magnitude of a population at that time of nearly 1 billion people, and it would have been a needle in a haystack kinda situation. Remembering that we couldn’t just Facebook message each other or text, snapchat or Instagram or what have you.  I’m not really sure what we would have done, had we been separated on that train.

In New Delhi, we found a lovely hostel with an internal garden where we rested up and did some reading but also our daily walks around the city streets to see the sights. 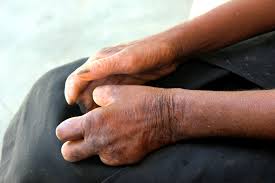 One day, we walked into a luxury hotel.  I shall preface this with the fact that we had just seen several lepers begging on the streets.  They were also known as The Untouchables.  The jewelry store in the hotel lobby was selling star rubies for thousands of dollars.  The patrons of the hotel were wearing gold-threaded saris. The dichotomy of wealth was hard to comprehend.

It was getting to be time to head home to Canada, since our wee parasites were becoming more and more of an issue.

When we got back to our mother land, we had no idea what we would do for employment.  And, we couldn’t wait too long because living in Canada is a heck of a lot more expensive than India and funds were dwindling. After some deliberation, we decided to head North again. This time to the bigger centre of Inuvik, Northwest Territories, Canada.  We had spent a year in the Arctic prior to traveling (see post North of 66 ~ A Trying Year in Polar River (age 27) ❄️)  We organized ourselves and made the cross-Canada trek in our tiny little car, the three-cylinder Chevrolet Sprint (nicknamed “Puny”) that I had bought in Comox, BC, upon acceptance into training for Army Logistics (see post I’m In the Army Now … 🔫). 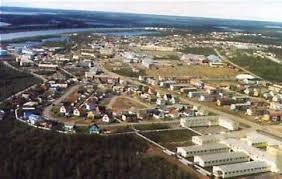 Upon arrival in Inuvik, some good friends of ours put us up for a few weeks in their house, which was very generous of them.  We started looking for work immediately. Within ten days, and some good luck, I had a full-time position as a Receptionist at the most northerly medical clinic in Canada, but then soon thereafter as the general manager. Dean found a job at Aurora College as the Director of Extension Programs. So, really good jobs in very short order.

The funniest thing would happen due to the parasite I still had.  As the receptionist in the medical clinic, I would routinely have to lead patients to their examination room. What was happening, in this evolution of the parasite problem, was it was causing me to toot upon movement of my body of any kind.  So, I’d be politely speaking to the patients as I walked them to the room and in the ‘back’ground was: toot, toot, toot like a little motor with each step I took. After being truly mortified when it first started, I later just mentally threw up my hands and gave in to the hilarity of it.  There was really nothing I could do.  I don’t think anyone really noticed anyway.

After our first paycheck, we found an apartment. 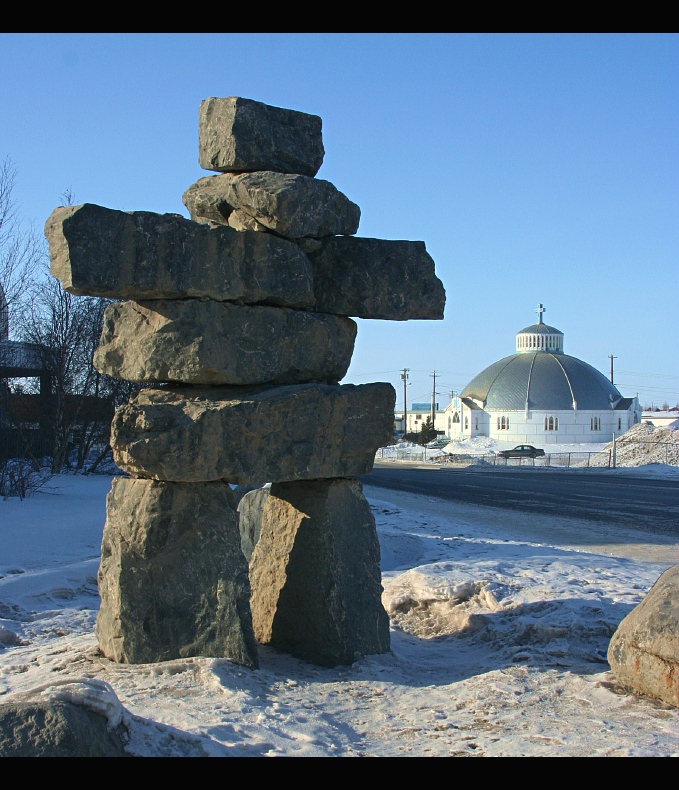 Living in the tiny town of Inuvik (7,000 people) after travelling in India (~1 billion people) was like night and day.  Dean and I were so blessed to have each other and our friendship, which was strong and had seen many adventures, hardships and blessings already.  We stayed in Inuvik for two years until it was time to go South, and we found ourselves Exiting the Arctic ☃️enroute to Toronto, Canada for another chapter.

(almost all photos are courtesy of google images)