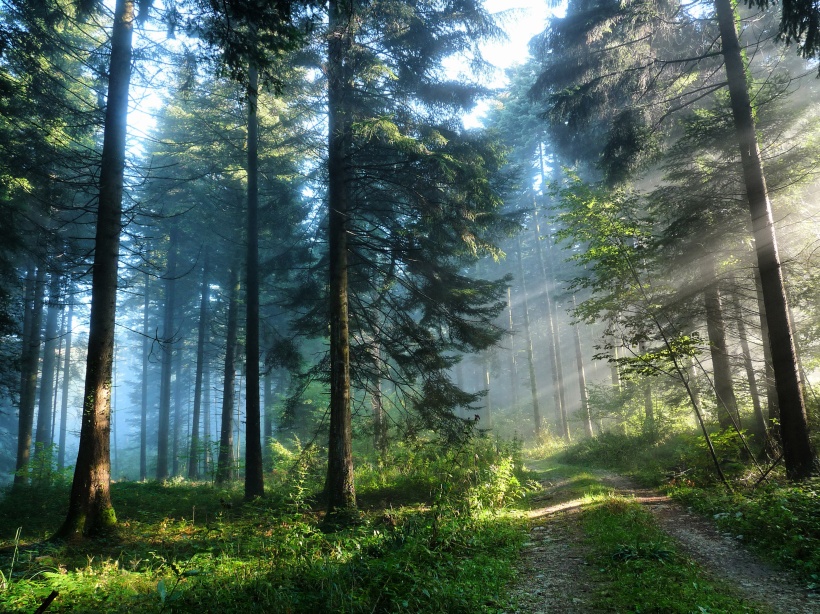 Yesterday I asked my friend Victoria if she wanted to get out for a mid-afternoon walk in a nearby Watershed Nature Preserve, just a few minutes from our Nova Scotian town. She had never been there she said as I explained where it is located.  She asked if it would be a tough walk because she still had a sore leg from taking a tumble over a root while walking Cape Split the weekend before.  My response:

Into the woods we wandered, after taking a big swig of water.  ‘Are you bringing water?’ Victoria asked.  My response:

Our first stop was to look at the old Reservoir Lake, walk over the new small log bridge and then along the shore of the lake for a little bit.  Then, a hard right into the woods again and it was there that I thought it would be a good idea to go on the Ravine Trail for a few minutes.  There was not a soul around and the trail was quite nicely marked with bright orange tape on trees the whole way.  The problem being that my phone rang and so I was not really watching as we got further and further along the trail that I had previously thought we would just be on for 5 minutes or so. I had been distracted and wasn’t really watching the way and thus missed any chance of getting off the trail and heading back to the car.

Victoria asked me if I knew this trail?  My response:

‘Nope, but I can’t image it will be too hard to figure out.  This park can’t be THAT big. Right?

We saw startlingly green ferns bathed in a beam of sunlight and stopped for a moment to admire them.  Little creeks and small waterfalls.  I was tempted to take a drink from the rushing water, but, thought better of it lest I give Victoria a heart attack.  She is from a medical background.  Enough said.  I informed Victoria of the cool item I had seen on TED talk called the LifeStraw. That you can just use the straw to drink from even stagnant water and it is totally safe.  In fact our friend Daisy and her boys had used one in Australia on a hike there.  I had two LifeStraws at home.  Oh well.  It takes days to die of dehydration, right?

We forded a few boggy areas, stirring up many a biting bug: black flies and mosquitoes. Victoria then showed me an angry red bump on her forearm and explained that she gets a bad reaction from black fly bites.  Oh wait, let me dig out my emergency bug dope for you. I thought as I reached over my shoulder for my small day pack.  Nothing.  Didn’t bring anything on this ‘stroll’ except my phone and a tissue…we were now approaching two hours in the woods.  Victoria’s face was getting pink.

I started to imagine what we would need to do if we couldn’t find our way out of this pretty place.  We would have to hunker down and try to stay warm until morning and then just walk until we would come to a road.  I was loathe to get hubby Dean to come look for us, should we then all be lost in the woods.  My imagination was getting the better of me.  We had hours of daylight yet.  For sure we would find civilization before dark.  Right?

I said to Victoria: ‘It could be worse, we could have a fifty-pound pack on our backs.’

Over another log bridge, a glimpse of a ruins of an ancient moss-covered stone bridge then squealing like school girls when a brown stick wriggled furiously away from our falling feet.  Next, up a soft pine-needle trail where the path split.  One way went slightly down through a nicely cut trail into a sunny meadow, the other went slightly up and into a dim tangle of woods.  The upward tending trail was marked with orange tape and upon inspection of the map just now, the very map we didn’t have yesterday, it would have taken us on a incline back up to the parking lot in about 2 clicks.  We chose the downward sloping pathway and walked for about another forty minutes coming out at a country road.

Looking right we saw L’Acadie Vinyards.  I smiled with relief.  I knew exactly where we were.  I may or may not have been here before, sampling their wares…  I said, ‘Okay, now we have to follow this road left and then left again on the next road and the next.’  It would have been 5 clicks more.

‘Can’t we just go in and have some wine?  Couldn’t Leo come get us?’

Much like that old much-loved but very corny tv show we all watched as kids in which a group heads out for a ‘three-hour cruise‘ and ends up on a deserted island for years and years…we had headed out for a wee twenty minute stroll and ended up in the woods for about three hours.  It all ended well.  Our worst fears were not realized and we even had wine and then a cutie come pick us up and pay the bill.  Gotta like that.

We had zigged when we should have zagged.  Ever done that?  How did it end up for you?

(Thank you google and those who took them for the pictures!)